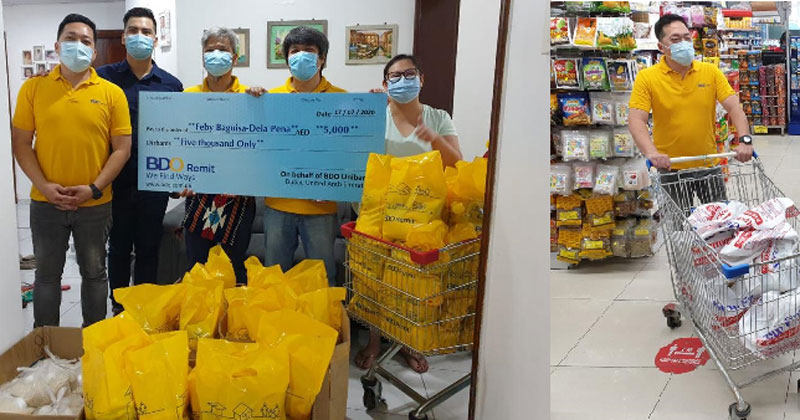 ONE of the worst effects of the COVID-19 pandemic is the increase in unemployment rate worldwide. As social distancing and community lockdowns have been strictly enforced to limit the spread of the virus, businesses had to either contend with a diminished customer base, suspend operations for a couple of months, or close shop altogether.

The results were staggering. According to the Philippine Statistics Authority, the country’s unemployment rate increased to 17.7 percent in April, the highest in 15 years, as the lockdown forced the closure of thousands of businesses. This is equivalent to an estimated 7.3 million Filipinos losing jobs.

For those who lost their jobs, their next thought process is understandably how to fend for themselves and their families. But there are those who still found the time and grit to care for others, their own troubles notwithstanding. Such was the case with Ms. Feby Baguisa. She used to work in ARY Speedremit, a former remittance tie-up of BDO, and who now lives in Muraqqabat Deira, United Arab Emirates. Like thousands others, Baguisa was an economic casualty of the pandemic, rendering her unemployed.

Despite her predicament, Baguisa still took the initiative of distributing daily meals to her fellow overseas Filipinos (OFs) who likewise lost their jobs because of the effects of the COVID-19.

Big push for Project Ayuda. BDO Unibank, through its remittance arm BDO Remit, supports the free food donation drive of Feby Baguisa (far right in the first photo), an overseas Filipino in the United Arab Emirates (UAE) who lost her job during the pandemic but still found the time and dedication to help other unemployed individuals through this campaign dubbed as Project Ayuda. Aside from the financial assistance, BDO Remit representatives also helped in the shopping, packing, and distribution of food items to unemployed overseas Filipinos in UAE.

Her efforts started at the onset of the pandemic-induced lockdown. Initially, she relied on the income from her husband for the preparation and distribution of meals which many unemployed OFs had come to expect as they queue up for the relief aid. The food donation became such a hit that even other nationalities lined up and became recipients of the free daily meals.

“These individuals are displaced, laid-off or even on a ‘no work no pay’ arrangement,” she said. “The meals somehow alleviate the plight of the day-to-day subsistence of our Kabayan in UAE.”

Eventually, outside help came in.

BDO Unibank took notice of her humanitarian efforts—dubbed as Project Ayuda—and supported her cause, as well as encouraged BDO Remit representatives in UAE to participate in the distribution of food packs to overseas Filipinos. Even non-Filipino companies joined the campaign and provided donation, including Alansari Group, Emirates Lotto, Khaled Alameri and West Zone Supermarket.

Baguisa’s food donation has already benefited some 400 individuals, composed mostly of OFs who were either laid-off, out of work or on a “no work, no pay” status.

“They are still trying and persisting to somehow find jobs and maximize all the opportunities available that would come their way,” she said. “The success of the campaign has exceeded our expectations.”

Baguisa also expressed gratitude to BDO’s participation in the campaign.

BDO is now encouraging its representatives from other regions to replicate Project Ayuda.

“Despite the adverse effects of the pandemic, we still want our Kabayans to enjoy Christmas. We hope to achieve that through the continuation and extension of Project Ayuda,” said BDO senior vice president and head of Remittance Geneva T. Gloria.