Experience the fun-tastic, events and creativity of the people of Western Visayas at SM City Iloilo on May 23-29, 2016!

Now on its 14th year, Fiestas in the City has become an institutional event promoting the beauty and grandeur of the Western Visayas region. This year’s version promises more exciting events during the week-long event. 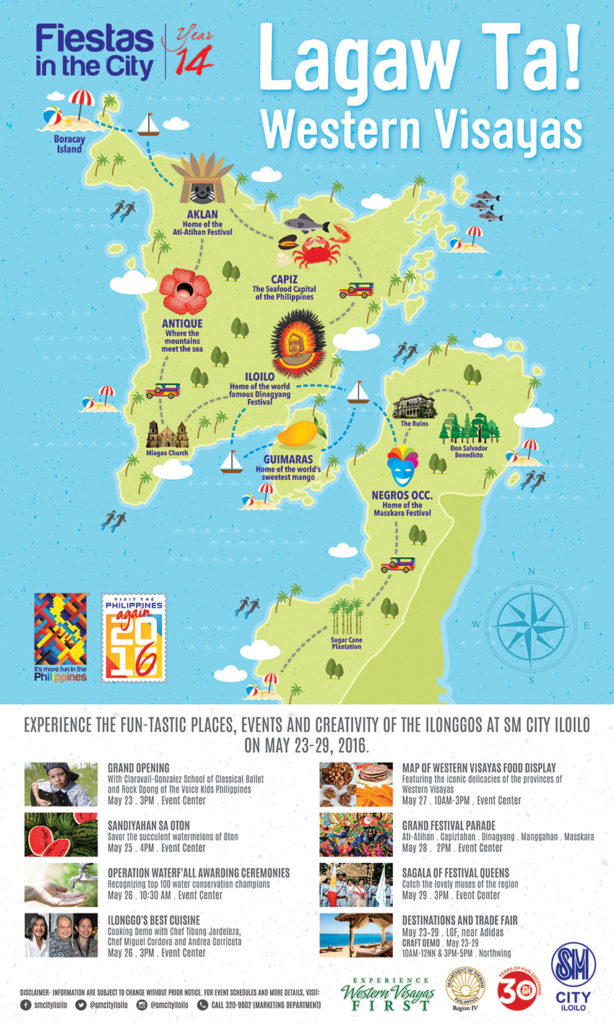 A grand opening will be held on May 23, 3pm at the Events Center. This will be highlighted by performances of the Claravall-Gonzales School of Dance and The Voice Kids Finalist Rock Opong.

On May 24, the Municipality of Oton will display their town’s pride and their residents’ creativity through the Sandiyahan sa Oton, a watermelon carving contest 3pm.

The Department of Tourism 6 Operation Waterf’all or Water for All will hold their awarding ceremony for the Top 100 Water Conservation Champions 10:30am on May 25.

The Best of Ilonggo Cuisine will be showcased by three of Iloilo’s culinary wizards—Chef Tibong Jardeleza, Chef Miguel Cordova and Andrea Gorriceta. A cooking demo will be at the event center, 3pm on May 26.

Another interesting event will take place on May 27 at 10am-3pm as iconic delicacies of the provinces of Western Visayas will be displayed in a form of a map at the event center. Delicacies such as bandi of Antique, Moledo of Aklan, Seafood of Capiz, Dried Mangoes of Guimaras, Bucarillo of Iloilo, Piaya of Negros Occidental and even the Buti. These delicacies will be shared to the shoppers in the afternoon.

A Grand Festival Parade will be held on May 28 at 2pm featuring Capiztahan, Dinagynag, Manggahan, and Masskara. These colorful festivals will go around the mall bringing the banner of pride of their respective provinces.

And as a part of this yearly event, the lovely muses of the region will join the Sagala of Festival Queens on May 29 at 3pm.

Aside from these colorful events, a Destinations and Trade Fair will also be held from May 23-29 at the lower ground floor near Adidas. Craft demos will also be featured at the Northwing from 10am-12nn and 3pm-5pm.

Fiestas in the City is a partnership between SM City Iloilo and Department of Tourism Region 6 together with the participating provinces and local government units.