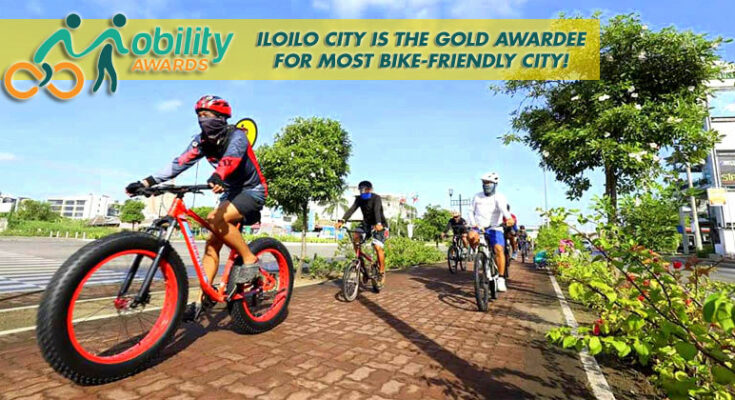 Iloilo City is the Most Bike-Friendly City in the Philippines, according to the Mobility Awards 2021!

Widely regarded as the Bike Capital of the country, Iloilo City bested 30 other cities to bag the top Gold Award in the Mobility Awards 2021 virtual ceremony on Thursday, November 25.

“Another milestone was once again made by the City of Love after we took home the top Gold Awardee for the Most Bike-Friendly City in the Philippines during the Mobility Awards 2021! Iloilo City is dubbed as the Bike Capital of the Philippines, and we are very proud to extend this recognition to our beloved people who also made a huge impact in achieving a more sustainable metropolis,” Mayor Jerry Treñas said via his Facebook.

The Mobility Awards is a platform that gives recognition to bicycle-friendly cities, workplaces, and establishments that advocate for inclusive and sustainable forms of mobility for all. It is organized by Institute for Climate and Sustainable Cities, The Climate Reality Project Philippines, 350 Pilipinas, MNL Moves, and Pinay Bike Commuter.

The organizers received a total of 126 unique entries nationwide, with 30 cities vying for the Most Bike-Friendly recognition. Iloilo City is the overall winner and the only awardee to get the Gold Award. Mandaue City and Cebu City were also recognized with Silver Awards.

As a Gold Awardee, Iloilo City will receive “a Gold Bicycle-Friendly Recognition Sign, a certification designating the city’s ranking, and gift certificates from bicycle-friendly establishments worth PHP10,000 for the city’s team members who worked tirelessly in making Iloilo City a Bicycle-Friendly City,” said Mobility Awards National Coordinator Arielle Celine Tabinga, in a letter to Treñas.

FULL SPEECH of Mayor Treñas:
“Having been chosen as the gold awardee for the Most Bicycle-Friendly in the Philippines by the Mobility Awards 2021, it is such a great honor for Iloilo City and its people. With our desire for a sustainable city, we provided a healthier alternative mode of transportation that aims to lessen carbon footprints as our response to the rising impact of climate change.”

“To keep bikers and commuters safe, we develop an 11-km bike lane that stretches out from Diversion Road to some select areas in the city. It includes a 4-kilometer protected bikelane for safety, marked by lines and plant boxes. We plan to interconnect the bike lanes all over the urban centers for easier transport and mobility, expanding it to a total of 32 kilometers.”

“I believe that bike lanes contribute more spaces on the road and improve traffic flow because cyclists do not need to dodge cars in the roadway, maintaining safety in turning and avoiding fixed obstacles. In addition, bike lanes create a feeling of safety for many people who would like to bike if they felt that it was a safe option. It also offers bikers the needed benefit of exercise.”

“All these benefits we get from well-constructed bike lanes, which were made possible through the efforts of former Senate President Fraklin Drilon, supported of course by the Iloilo City Government and its people.”

“It’s nice to know that Ilonggos are maximizing the use of these bike lanes and at the same time taking care of them. We look forward to having more safe open spaces for the Ilonggos. And I would like to thank the Mobility Awards 2021 for recognizing Iloilo City as the most bicycle-friendly city in the Philippines.”