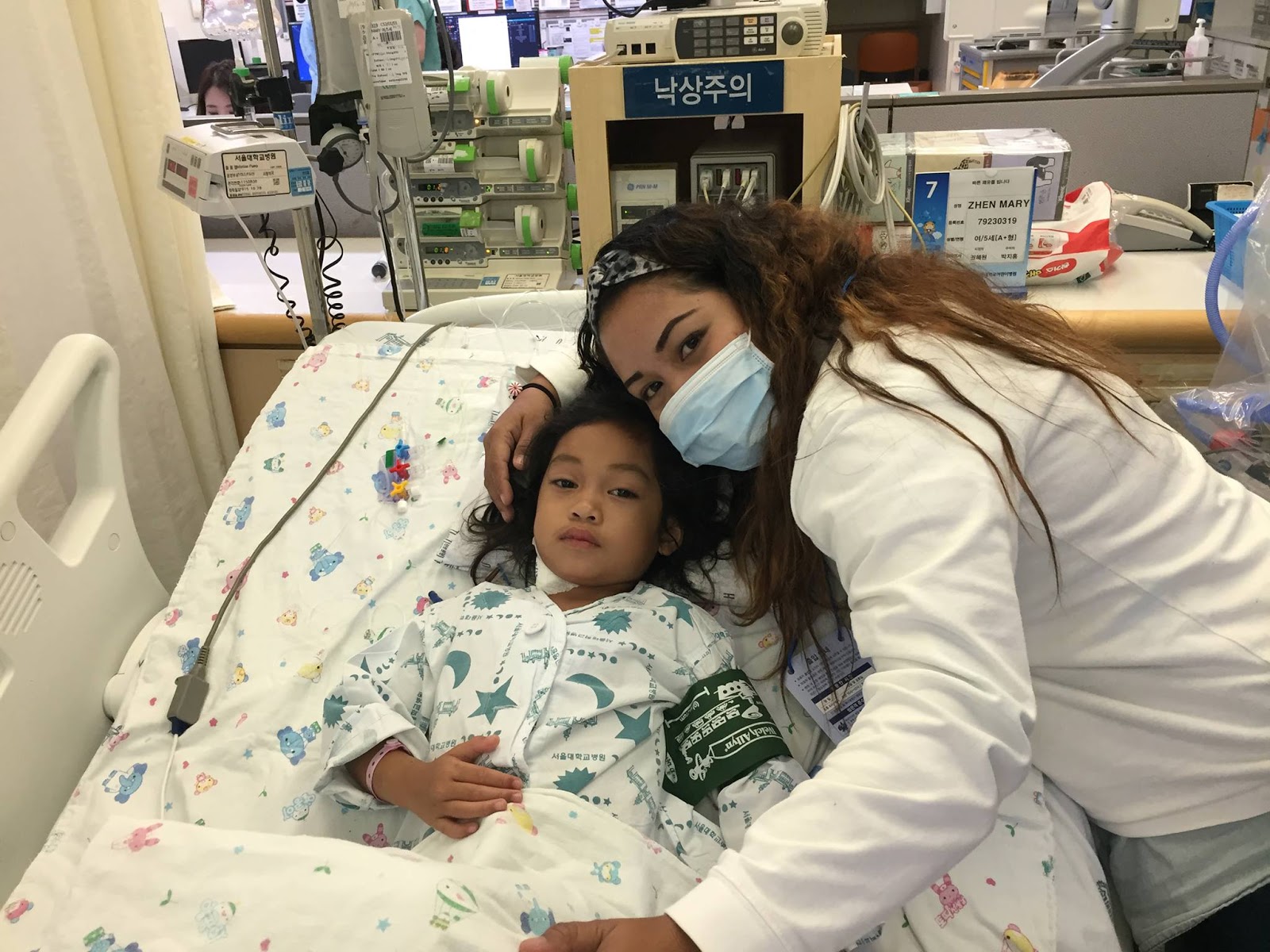 The 5-year-old from Dumangas Iloilo, who was diagnosed with large Patent Ductus Arteriosus (PDA), underwent a successful free operation at Seoul National University Children’s Hospital in South Korea on Nov. 12, 2018.

PDA is an unclosed hole in the aorta. It results in the aorta pumping extra blood into the pulmonary arteries, thus, making the heart and lungs work harder.

On Tuesday, Deypalubos underwent thoracotomy, a type of surgery where an incision was made in the chest to access the heart and close the hole. It was conducted by SNUCH’s thoracic and cardiovascular surgeon Kwak Jae Gun.

SNUCH is a sub-facility of Seoul National University Hospital (SNUH), one of the best hospitals in South Korea.

Deypalubos was admitted on Nov. 6. Two days after, a catheterization was done and it was found out that she has high pulmonary artery pressure, thus the need for the surgery.

“Small PDA will not cause any problem and has no complications. But large PDA must be closed as young as 2 years old. If we lose the time for the operation, this structure can result to pulmonary hypertension and the patient can be a blue baby when she reaches adolescence period,” he said.

The surgery has 0.1 percent mortality rate and is not risky. But if the operation is not conducted, Kim said Deypalubos could “lose the time to live longer.”

The operation lasted for about four hours. Deypalubos was immediately transferred to the general ward after staying at the intensive care unit for less than one day. She is stable and is expected to recover faster for about one to two weeks.

“Because she has to go back to the Philippines we have to check more intensively,” Kim said.

Post medical care is also advised. The hospital recommended for a hospital checkup when the child returns to Iloilo.

According to her mother, Julie, the patient wants to be a doctor. She would always ask her parents go buy her toys like stethoscopes.

Her mother is a housewife and the father is a tricycle driver. The family’s measly income could not afford the huge operation cost.

“My daughter can now live a normal life and even fulfill her dream of becoming a doctor,” she saidd.

SNUH sponsored the operation through its Overseas Child Support Project. The Korean Health Industry Development Institute shouldered the meals, accommodation and round trip ticket. Medipeace, a global health Korean non-government organization (NGO) partner of the Iloilo provincial government, covered the extra cost of the operation and other expenses.

Julie, who accompanied her daughter in South Korea, thanked the hospital, KHIDI, Medipeace, and the provincial government for their help.

Mr. Son Woo Sik of the SNUH Public Health Medical Service Department said the project has been running for more than 10 years.

For this year, they sponsored the operation of four foreign recipients – two from Uzbekistan, one from Myanmar, and one from the Philippines. (Louine Hope Conserva/Capitol News)