Guimaras mangoes are touted as the sweetest in the world, thus the demand for it in local and international markets is high and it has become a centerpiece of the province of Guimaras’ tourism. 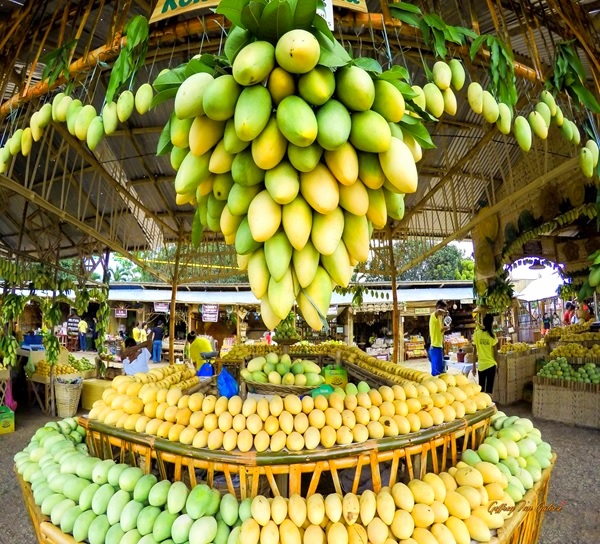 These mangoes are served in Buckingham Palace and the White House. This sweet and succulent fruit was also featured in Magnolia Ice Cream’s Best of the Philippines through their Mangoes and Cream and Mangga’t Kasoy ice cream flavors.

Guimaras mangoes’ seeds and pulp were also confirmed to be weevil free by the Animal and Plant Health Inspection Service- United States Department of Agriculture (APHIS-USDA) and Australian Quarantine and Inspection Service (AQIS).

The mango variety in focus is the carabao mango, considered to be one of the best varieties because of its tender taste and slight aroma.

Originally from the Indo-Burma region which includes India, Burma and Malaya, the fruit is elongated and oblong-shaped which weighs about 270 to 440 grams and with thin and yellow pulp. Its flesh is yellow in color, very tender and melting with a delicate aromatic flavor while the fiber is medium-coarse, short and is almost cramped to the seed’s edge. Its tree has a coarse, large and conical trunk with shallow and small cracks on the bark.It bears flowers as early as October while the fruit is available from November to June.

Carabao mangoes have different varieties including Talaban, Fresco, Guimaras Super (Galila), JTA Sweet, GES73, 77 84, 85 and Tanaleon, etc…Galila is known as the “sweetest mango in the world” because it has a Total Soluble Solid (TSS) of 22˚ Brix.

According to the Value Chain Analysis Report of the Guimaras Provincial Office for Agricultural Services (POAS), carabao mangoes are grown in all of the province’s five municipalities, namely; Jordan, Buenavista, Nueva Valencia, San Lorenzo and Sibunag. These towns comprise 60,457 hectares wherein 92.84% or 56,127 hectares are dedicated to agriculture. Out of this, about 16% is dedicated to mango plantations which as of 2014, had 274,822 mango trees.

The years 2006 and 2007 remained as the peak of mango production in the province, largely because of demand for mangoes from growing companies like Dole Philippines, DHM, Hi-Las Marketing Inc., Diamond Star, and Lapanday Foods Inc.

From 2008 to 2013, the province of Guimaras’ mango industry posted an average growth of 5.99% with 10,025.68 MT produced in 2014. This is because of the support of the Provincial Government through the Provincial Office for Agricultural Services and the Department of Agriculture RFU VI-HVCDP Program on Mango Industry Interventions that provided mango growers with mango flower inducers and power sprayers. The provision of inputs was channeled through the Guimaras Mango Growers and Producers Development Cooperative.

There are 7,482 mango growers in Guimaras. The Oro Verde Mango Plantation and Guimaras Tree Farm are the largest and are located in Buenavista. Oro Verde alone spans 237.016 hectares with more than 18,000 grafted mango trees. That is approximately 13% of the total mango trees in the municipality.

The second largest mango plantation is Southern Orchard, located in Ravina, Sibunag. It spans 220 hectares with 14,000 grafted mango. That is almost 39% of the total mango population in Sibunag.

Guimaras’ mango production comprises 21% of Western Visayas’ total production, 60% is contributed by backyard growers while the 40% is produced by orchard.About 70% of the production is sold fresh while 30% is sold to local processors.

Where they are mangoes, there are by-products that provide more variety to consumers who want to try the sweetness in different forms. These are sold in grocery stores all around Western Visayas and popular as pasalubong items.

An Ordinance regulating the harvesting and sale of immature mango fruits intended for table ripe consumption was promulgated in 2011 to maintain the status of the Province of Guimaras as the producer of the sweetest and the best quality mangoes.

In 2002, about 2.4% of the total mango production was allocated for export. Guimaras’ carabao mangoes were exported to Singapore, Hong Kong, Korea, Japan, USA and Australia.

However, in 2008-2010, there was zero exportationdue to La Niña that resulted to a reduction in production by 38%. Additionally, some mango trees needed rehabilitation because of poor orchard management practices in terms of fertilization and pruning.

This was confirmed by European Union (EU) Ambassador to the Philippines Franz Jessen in an article published in the Manila Bulletin recently. “There is indeed a market for Guimaras mangoes,” said Jessen.

The news article also mentioned that the Intellectual Property Office of the Philippines (IPOPHL) is working to provide Guimaras fresh mangoes with geographical branding and that Jessen replied: “GI tagging is meant to associate the mangoes with Guimaras province, which can also bring a domino effect in terms of other trade opportunities with EU’s 28-member states.”
Indeed, with the continued empowerment, production of good quality fruits and adherence to equitable marketing systems, Guimaras’ mango industry can compete in the global market and further boost its economy and lure more tourists in the island-province. [Photo by Geffrey Ian V. Galvez]