After making it to the list of top highly urbanized cities (HUCs) in the country for the past 3 years, Iloilo City fell big in the latest rankings of Cities and Municipalities Competitiveness Index (CMCI). 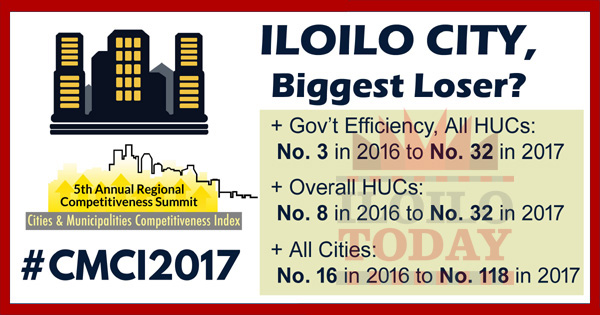 CMCI is an annual ranking of Philippine cities and municipalities developed by the NCC through the Regional Competitiveness Committees (RCCs) with the assistance of the United States Agency for International Development (USAID).

It measures competitiveness at the local government level using 40 indicators grouped into four equally-weighted pillars: Economic Dynamism, Government Efficiency, Infrastructure, and Resiliency. Scores on each pillar were combined to form the overall score used to rank cities and municipalities.

The low category scores of the city resulted to a big drop in rankings among HUCs: from No. 8 of 34 in 2016 to No. 32 of 33 in 2017. In overall competitiveness among 145 cities nationwide who participated this year, Iloilo placed 118th after being no. 16 last year.

NCC has been ranking cities and municipalities based on CMCI and giving awards since 2013. This year, a total 145 cities and 1,342 municipalities participated in the index or a total of 1,487 local governments out of 1,634 LGUs in the country.