Summer time is here and so is the famed Manggahan Festival of the province of Guimaras.

The much awaited month-long celebration of Manggahan Festival 2017 finally opened with a grand caravan and launching program last March 31, 2017 at the provincial capitol.

No less than the Hon. John Edward Gando, acting Governor; Hon. Ma. Lucille Nava, congresswoman of the Lone District of Guimaras and the members of the Sangguniang Panlalawigan welcomed the visitors to the “home of the world’s sweetest mangoes.”

Public and private sectors joined the caravan to visit every municipality of Guimaras to show support to the upcoming Manggahan Festival activities. Through the event, the municipalities of the province also unveiled the schedules of their Manggahan sa Kabanwahanan which will start in the Municipality of San Lorenzo on April 8-9.

A TASTE OF GUIMARAS

Residents of Guimaras, nearby Iloilo and other tourists will be treated to a bigger, better and a sweeter Manggahan Festival this year. To have a taste of what it has to offer, the province is hosting a week-long exhibit called “Patilaw sa Manggahan” at Robinsons Place Iloilo on April 1 to 7, 2017.

Dubbed as the “island that fits your taste”, Guimaras has beautiful destinations and exciting activities that await these visitors. One can go on a bike adventure, island hopping, do sightseeing, visit historical sites and shop around the best agricultural sites inits five municipalities to have a taste of the island’s produce.

This year’s theme for the festival is “The Journey that is Guimaras. Sadto. Subong. Kag sa Masanag nga Palaabuton.” The theme highlights the richness of Guimaras and its happy people, simple past, successes and potential of becoming even more that what it is now.

And you are invited to be part of it. Lakat na ta sa Guimaras! 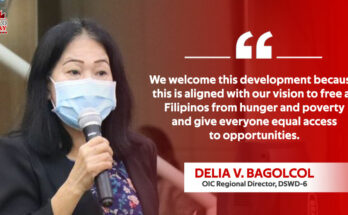