A recent study on health and wellness showed that Ilonggos are among the most stressed of all Filipinos, being often pressed for time and are unable to get enough sleep frequently.

A total of 1,350 respondents from 22 key cities and towns nationwide aged 18-90 were interviewed for the 2nd PhilCare Wellness Index commissioned by the leading health maintenance organization (HMO). Of the total sample size, 300 respondents came from the Visayas, 75 of which are from Iloilo.

The respondents were asked to rate themselves from a seven-point scale, with the score of one as “very good;” two as “good;” three as “somewhat good;” four as “neither good nor bad;” five as “somewhat bad;” six as “bad;'” and seven as “very bad.”

At the same time, though, researchers of the PhilCare Wellness Index discovered that Ilonggos could be the Filipinos’ role model when it comes to preparing for medical emergencies.

Ilonggos are able to pay for their medical bills and are able to see their doctors and dentists regularly more often than the rest of the country. 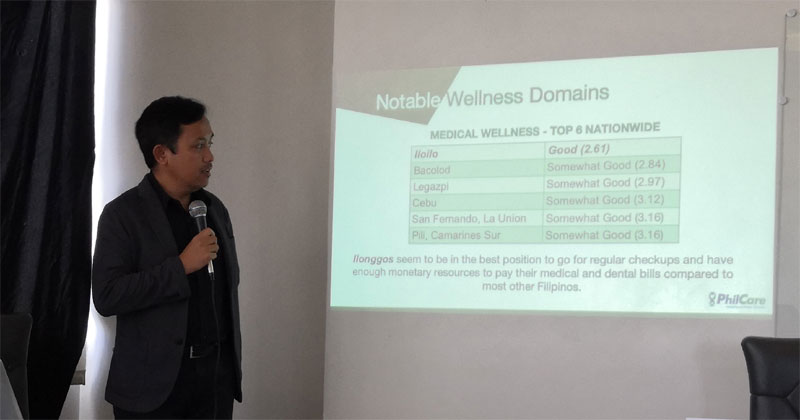 Lead researcher and University of the Philippines associate professor Dr. Fernando Paragas said that the PhilCare Wellness Index, the only study that measures the perceived health and wellness of Filipinos, is composed of six wellness domains, namely psychological, physical, medical, nutritional, financial, and lifestyle. Each domain is, then, composed of several wellness statements.

Unfortunately, Iloilo scored the highest for stress together with Legazpi at 2.63. Residents of both cities said they were “stressed” compared to those in Bacolod (2.76); San Fernando City, La Union (13.16): and Pili, Camarines Sur (3.19), who said they were only “somewhat stressed.” Conversely, most other Filipinos are more chill compared to Ilonggos with the nationwide score plotted at 3.88 or “neither stressed nor not stressed.” Interestingly, Ilonggos spend the most for wellness among Visayans and even more than the rest of the country.

Ilonggos allot about Php3,300 monthly for R&R spending, beating Bacolod (about Php2 800) Cebu (at least Php2,000), Tagbilaran (at least Php2,300), and even most other Filipinos (at least Php3,000). Wellness Leader in the Visayas Iloilo also led in most other aspects of wellness in the Visayas, based on the study. Among the region’s residents, Ilonggos have the most time for rest and recreation, are most conscious about their diet, are the most satisfied with their personal lives, and even are the most financially capable.

Ilonggos topped the lifestyle wellness domain with a score of 2.65 or “good.” This means they have the most time for recreational activities, the best work-family balance, and the most sufficient rest among Visayans compared to their Bacolod (2.88), Cebu (3.19), and Tagbilaran (3.18) counterparts, who only said “somewhat good.” Iloilo also beat the nationwide score of 3.12, also classified as “somewhat good.”

The city’s residents also signified having the best nutritional wellness in the region, meaning they are the most aware Visayans in terms of knowing their diet and their actual intake. Iloilo scored 2.64 or “good,” besting Bacolod (2.84), Cebu (3.20), Tagbilaran (3.25), and even most other Filipinos (3.13) whose nutritional wellness is said to be “somewhat good.”

Ilonggos likewise said that they are the most contented and that they have the most purposeful and most meaningful lives among Visayan respondents. They indicated having “good” psychological wellness, scoring 2.63 on the Wellness Index scale. This is better than that of Bacolod (2.87), Cebu (3.12), and Tagbilaran (3.10), all of which are “somewhat good.” Most other Filipinos also signified having “good’ psychological wellness, with a score of 2.71.

Having a good disposition with finances, or financial wellness, is also a key indicator of wellness, and Ilonggos signified having the best grasp of it among Visayans. They earn the most sufficiently to cover for their needs. are most comfortable with the amount of debt they have, and are able to save and invest the most. Iloilo scored 2.61 or “good,’ beating Bacolod (2.85), Cebu (3.20), Tagbilaran (3.22), and even the nationwide average (3.42), all of which are “somewhat good.”

The 2019 PhilCare Wellness Index likewise revealed that Ilonggos have the best sex life among Visayans and have a better one compared to the rest of the country. Of the 75 respondents, 46 indicated being sexually active. Iloilo respondents said they have a “good” sex life, scoring 2.70 on the Wellness Index scale Compared to those in Bacolod (2.84), Cebu (3.11), Tagbilaran (3.02), and even most other Filipinos (2.74), who said theirs was only “somewhat good.”

Ilonggos have the best sex life, according to 2019 Philcare Wellness Index.

Ilonggos also have more sex than the rest of the country, saying they do it twice a wee, more than the nationwide and Visayas average of at least once a week. Bacolodnons and Tagbilaranons also indicated having sex twice weekly.

The study also found that Ilonggos smoke both traditional and e-cigarettes the most among Visayans, but less than most other Filipinos. They are also among the heaviest consumers of alcohol in the reaion. Of the 75 respondents, 61 said they drink beer, white 30 smoke cigarettes. 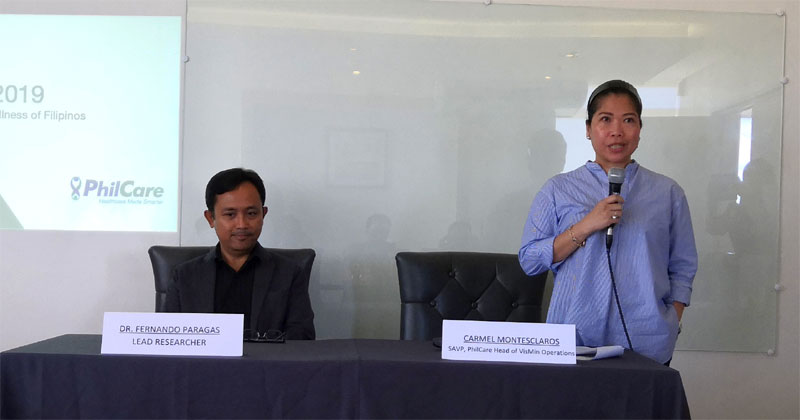 The study was inspired by wellness and health indices in New Zealand (The Sovereign Wellbeing Index of 2015), Canada (The Canadian Index of Wellbeing), and the United States (The State of American Well-Being of 2017). Dr. Paragas said this year’s PhilCare Wellness Index involved not just a survey, but also a series of focus group discussions, where participants from different sectors delved on problems and solutions relevant to the goal of inclusive health care. PhilCare President and CEO Jaeger L. Tanco said the results of the survey are very useful in helping the health sector come up with programs that address the needs of Filipinos, helping them attain a better state of wellness.

“There is more to health than just the absence of disease. Our vision is to help promote a brand of health that is holistic and inclusive. The PhilCare Wellness Index gives us a clear picture on where we are when it comes to wellness and, more importantly, it charts a clear path on how far we can go to promote health among Filipinos,” he said. “We also find it very important to look after the overall health and wellness of a city that is becoming increasingly progressive. The Iloilo results of the 2nd PhilCare Wellness Index will certainly give us insight on how we can work towards optimal well-being for llonggos,” he added.

Former Health Secretary and Chairman of the 2019 PhilCare Wellness Index, Dr. Enrique T. Ona, said PhilCare intends to share more findings of the study to the public to raise awareness of the well-being of Filipinos.

“PhilCare will also forge partnerships with the government sector so they could use this proprietary study of PhilCare to craft relevant policies. We have findings in this study that may be very useful in the goal of the government to attain truly universal health care,” Dr. Ona said.

PhilhealthCare, Inc. (PhilCare) is among the top two most preferred HMOs in the country today. It distinguishes itself from other health maintenance organizations (HMO) in the Philippines by advocating wellness as a more holistic approach to health.

PhilCare pioneered the country’s first Wellness Index in 2014. Based on the findings of that study, PhilCare introduced the very first prepaid health plans in the country. From prepaid to comprehensive coverage, PhilCare’s extensive line of products covers hospitalization, out-patient and emergency healthcare needs across a nationwide network of hospitals, clinics, and physicians.

PhilCare 360, on the other hand, provides members with updates about health information, preventive measures against diseases and illnesses, and lifestyle trends that promote health and wellness. Meanwhile, PhilCare’s tech-enabled customer service efforts involve their accessible website and e-commerce, their call center that’s available 24/7, and its HeyPhil App where members can ask queries and request for a Letter of Authorization (LOA).

PhilCare’s commitment to promote wellness among Filipinos makes it an essential pillar of Maestro Holdings, a grand concord of four of the biggest and respected financial companies in the Philippines. Under the Maestro’s baton, PhilCare joins four of the most recognizable names in their respective industries: PhilsFirst, the first domestic non-life insurance company in the country: PhilLife, one of the most trusted insurance providers in the Philippines; PhilPlans, one of the leading financial solutions companies providing pension, education, and memorial programs.