Are you ready #AlDubNation in Iloilo? The ultimate ‘Bae’ Alden Richards will be in the City of Love for the Kapuso Fans Day on November 6, 2015! 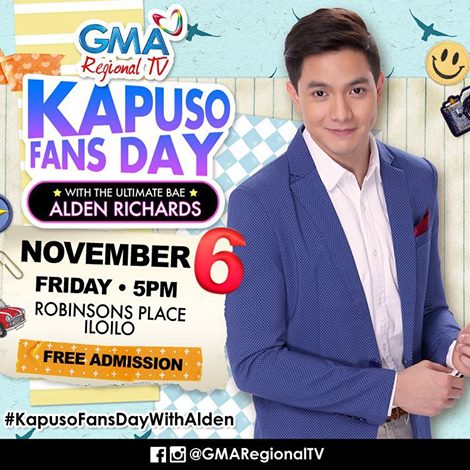 GMA Regional TV announces that half of the phenomenal AlDub loveteam will lead the Iloilo leg of Kapuso Fans Day on first Friday of November at Robinsons Place Iloilo.

Fans will have a chance to see Alden up close as he sing and dance on the show, which will start at 5PM, on a free admission.

The ‘accidental’ loveteam of Richards and Youtube star Maine Mendoza aka Yaya Dub took the television and social media by storm, with their exciting and ‘kilig’ split-screen moments in Eat Bulaga!’s Kalyeserye segment.

The show captured the hearts of million of followers, breaking Twitter records by posting 25.6 million tweets for #ALDubEBforLOVE hashtag on September 26.

The popularity of the show also resulted to pouring in of commercial endorsements by the AlDub tandem.

Robinsons Place Iloilo will certainly be bursting at the seams come November 6 for the Kapuso Fans Day.