SM City Iloilo is among this year’s awardees of the Bangko Sentral ng Pilipinas (BSP) for supporting the agency in its statistical undertakings, information needs and advocacy programs.

BSP has conferred the Outstanding Regional Partner award to the region’s biggest mall for the agency’s Demonetization Program, during the 2017 BSP Stakeholders Awards Ceremony and Appreciation Lunch last August 8, 2017 at Amigo Terrace Hotel in Iloilo City.

Focusing on the theme “Transforming Shared Visions into Dynamic Partnership,” the awards ceremony which was part of the BSP’s 24th anniversary celebration, was led by Monetary Board Member Juan D. De Zuñiga, Jr.

Each awardee was presented the “Dynamic Balance, Philippine Eagle” trophy while the Gold Hall of Fame awardees received the “Soaring to Greater Heights” trophy, both of which were crafted by visual artist and multi-awarded sculptor, Mr. Ferdinand Cacnio. 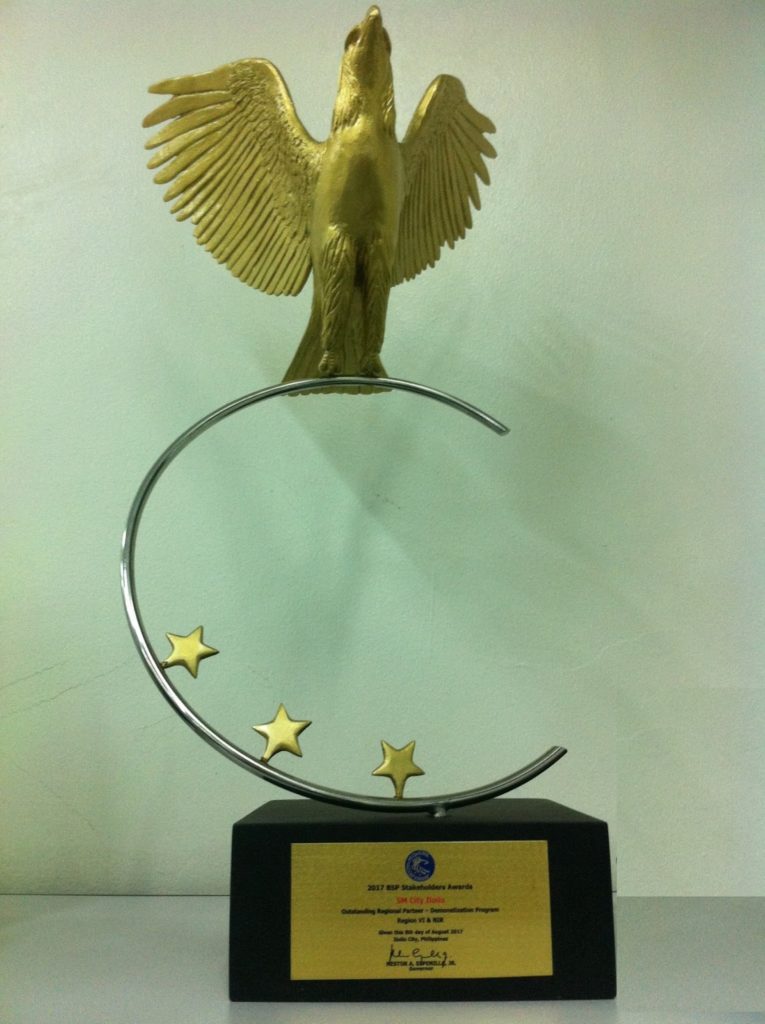 The BSP gave a total of 13 awards to outstanding partners in the event: for the Information Support category—two for the Business Expectations Survey (BES), and one for Sources of Information for the Report on Regional Economic Developments; and for the Advocacy Support category—six for the Currency Programs of the BSP, three for Implementing BSP Advocacy on the Conduct of Public Information Campaigns and one for Special Category. Two Gold Hall of Fame Awards were also conferred to outstanding partners who won in the same award category for three consecutive years.