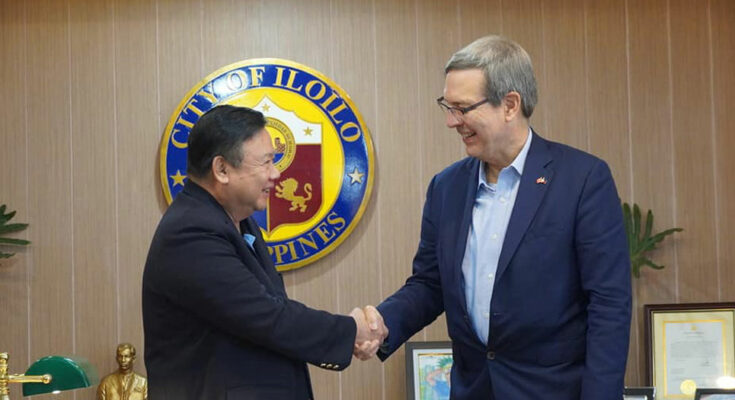 The Canadian Ambassador to the Philippines Peter MacArthur lauded the City of Love during his courtesy visit to Mayor Jerry P. Trenas at City Hall on August 31.

MacArthur praised Iloilo City for being one of the most livable cities in the country, citing the City Government’s initiatives to rehabilitate and refurbish plazas, as well as actively securing resources and developing policies to ensure their preservation.

“I am happy to see that old Spanish plazas are becoming greener. I think that it is good not only for the citizens of the city but also for tourists to learn about the Spanish history of the city. Rejuvenating the plazas with trees and greenery will be very good for the citizens and the environment. It will also draw more tourists from other big cities,” MacArthur said.

“When I flew along the coast of Panay, I found the greenery, farmland, and rice cultivation to be very impressive,” he added.

In line with this, a Canadian academic team recently established special research projects in Iloilo, Naga, and Manila, to assist city governments in dealing with coastal problems such as shoreline erosion, climate change, and the utilization of mangroves to not only control sea erosion but also to capture carbon that is detrimental to the environment.

MacArthur also sees the city as a benchmark of universities and colleges producing competent students as part of the young demographic and future of the country.

“One of the reasons why Canadian companies decided amongst all cities to establish themselves here is the quality of young Filipino workers that are graduates from universities and colleges here in Iloilo City,” he added.