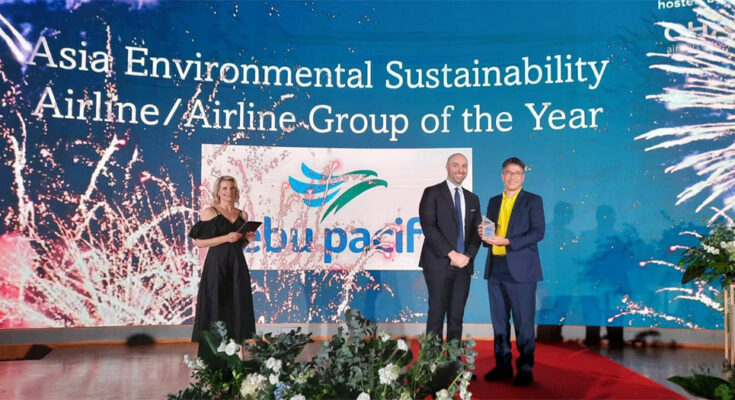 Cebu Pacific received the Asia Environmental Sustainability Airline / Airline Group of the Year from the Centre for Asia Pacific Aviation (CAPA) for its leadership in sustainability performance in the regional aviation industry.

CEB, the Philippines’ leading carrier, was recognized for its ongoing integration of various sustainability programs across its day-to-day business, as well as its continuous collaborations with industry stakeholders to drive adoption of green initiatives with the regional industry.

“We are honored to be the pioneer recipient of such an award which should help encourage an even greater push and recognition of sustainability’s importance,” Lao said.

Even before the pandemic, CEB has begun its sustainability journey through its early investment in fuel-saving aircraft. By 2028, it intends to operate an all-NEO (New Engine Option) fleet, allowing the airline to remain true to its commitment to provide low fares, while becoming more efficient and environment-friendly.

“The Philippines is among the top countries at risk of adverse impacts of climate change so our commitment to sustainability has evolved over time. Cebu Pacific is among the first low-cost carriers in the world to adopt carbon emission reduction initiatives. We are committed to investing time and resources to become the greenest airline in Asia,” said Mark Cezar, Cebu Pacific Chief Finance Officer.

This year, the airline has also beefed up its sustainability initiatives as it started using Sustainable Aviation Fuel (SAF) in its aircraft deliveries. On September 28, it operated its first SAF-powered commercial flight, becoming the first Philippine carrier to incorporate SAF in its commercial operations.

CEB intends to make SAF a permanent part of its operations through aircraft deliveries from Airbus. By 2030, it targets to use SAF across its commercial flights.

“We have a long way to go to achieving the target of net zero by 2050 and we need our partners to commit, so we all succeed and create meaningful change. We encourage everyone to join us on this journey,” Cezar said.