Men riding in pairs on a motorcycle will be banned in Iloilo City if the proposed ordinance of Councilor Plaridel Nava is passed and becomes a law. 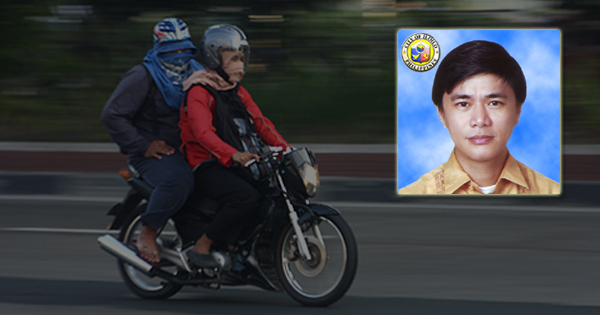 Nava’s proposed regulation ordinance no. 16-10-13576 entitled “Motorcycle Riding in Tandem Ordinance” was approved in the first reading in Iloilo City Council session on Tuesday. The measure seeks to regulate motorcycle riding-in-tandem in the city and provide penalties for violators.

According to Nava, the ordinance is necessary due to the numerous cases of shooting incidents perpetrated by riding-in-tandems in the city. He cited upholding of human rights and general welfare of the city against lawless violence as his reasons for filing the said ordinance.

There will be exemptions like allowing women, minors, relatives up to 4th civil degree of affinity or consaguinity to ride in pairs, and also members of law enforcement agencies, he clarified.

He also pointed other cities in the country which has successfully implemented such ordinance like Mandaluyong City, which resulted to reduction of unlawful incidences committed by criminals riding motorcycles in tandem.

The proposed ordinance has been referred to the Committee-in-charge headed by Councilor Jeffrey Ganzon for further discussion and scheduling of public hearing. [With reports from Bombo Radyo Iloilo]