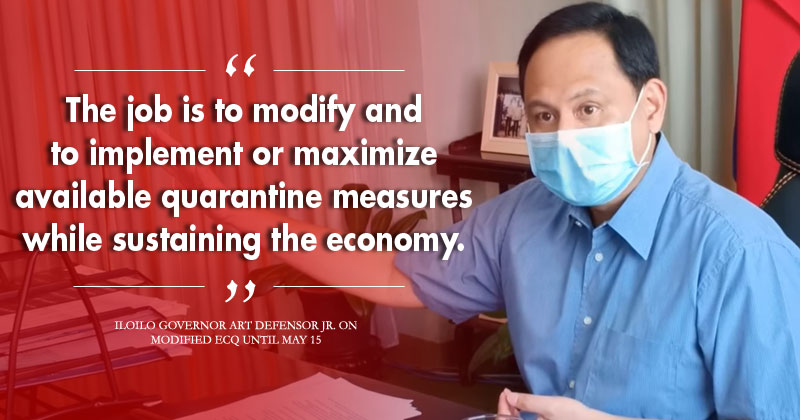 The Iloilo Provincial Government is planning to extend the Enhanced Community Quarantine (ECQ) in the Province of Iloilo until May 15, 2020.

In a media interview posted at Balita Halin Sa Kapitolyo Facebook page, Governor Arthur Defensor Jr. said that he is eyeing to extend the ECQ but “not under the same terms and features.”

Defensor said that while ECQ is the most effective measure against something like the spread of Coronavirus Disease 2019 (COVID-19) pandemic, it is short term because of its necessary impact on the economy.

He intends to implement a modified ECQ which will address the economic side.

“If we want to move on, we have to change it because right now, the basis for any quarantine measure that will be implemented after April 30 is not really the status of COVID-19. The epidemiology of COVID-19 is unsure,” said Defensor.

“The job is to modify and to implement or maximize available quarantine measures while sustaining the economy,” Defensor emphasized. “So the basis for any adjustment that we have to make is economic now.”

“Previously the general rule is, ‘all establishments will be closed except the following: food, health, utilities, and basic necessities’. We have to change that so that the economy will run.”

“We have to change the general rule to, ‘all establishments will be opened except the following’. Those that will be closed are those that the promotion of the social distancing measures is very difficult,” Defensor said.

Defensor added that under the modified ECQ, travel ban will maintain “because that is the most important part of the measure.”

The governor is yet to issue an executive order regarding this modified and gradual easing of the ECQ.

Meanwhile, Iloilo City Mayor Jerry Treñas said he will convene with Gov. Arthur Defensor Jr. and other Chief Executives in Panay Island regarding the possible extension of the ECQ until May 15.

The ECQ was implemented in Iloilo City and Province starting March 20 and was supposed to end on April 14 but was extended up to April 30 in a bid to prevent the spread of COVID-19.