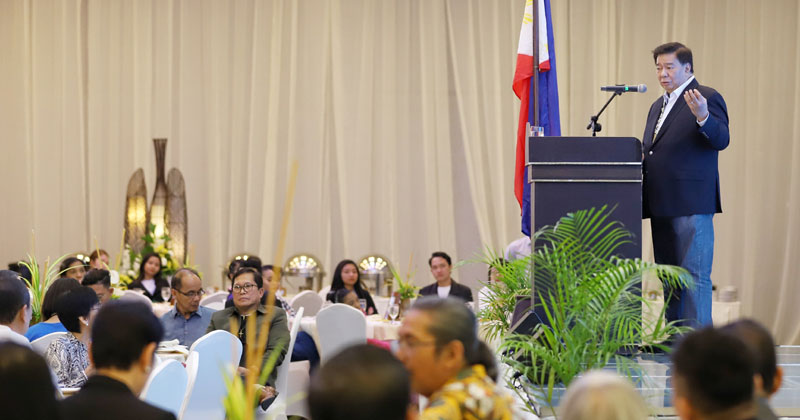 Senate Minority Leader Franklin Drilon urged the Western Visayas Regional Development Council to craft a roadmap aimed at sustaining the region’s growth and development amid the expected slowdown of the economy due to the Coronavirus (COVID-19) pandemic.

“The formulation and implementation of this roadmap is very timely and critical. This roadmap will provide us a clear direction of where we are today and where we are headed. No province should be left behind. We will move forward as one region,” Drilon said.

“There is a need for greater collaboration between the government and private sector to keep up with the challenges that we face today,” he added.

Drilon said he has asked the National Economic Development Authority (NEDA) in Region VI to initiate the crafting of the roadmap in consultation and coordination with the Regional Development Council, the academe, business community, and various stakeholders.

“We need to collaborate and harmonize our goals and plans as one region. Now more than ever, we need to work together in order for our economies to grow and preserve the gains that we have achieved in the past,” he said.

“The private sector should actively get involved with crafting the roadmap and monitoring its compliance,” he added.

Drilon noted that WV is the fifth largest economy in the Philippines outside the National Capital Region (NCR) in 2018.

Drilon said that “the roadmap will outline the emerging opportunities for the region which boasts accessibility and inter-connectivity as its major assets.”

The Ilonggo leader said that the region’s conectivity will further improve with the development of the Port of Iloilo by the International Container Terminal Services, Inc. (ICTSI).

Drilon said the ICTSI will push through with its plan to infuse P8.7 billion to expand the Port of Iloilo. The ICTSI is still waiting for the green light from the government.

“This project will further enhance regional connectivity and facilitate faster trade between and among provinces. Agricultural products and fisheries production in the region can enter big domestic and foreign markets in refrigerated containers, which will make our products very competitive,” Drilon said.

The project will bring the Iloilo Port to world class levels by maximizing big ship capability; installing ship-to-shore gantry cranes; and continuously upgrading yard capacity aligned to traffic studies. The project also includes the building of a terminal for cruise ship passengers to meet the objectives of the National Tourism Development Plan.

Drilon said that the ICTSI’s plan is very timely given that Iloilo is poised to become a major exporter of agricultural products once the Jalaur River Multi-purpose Project is completed in 2022. The project will irrigate 31,000 hectares of rice land, doubling the rice production of Iloilo and the region in general.

Drilon said job opportunities await the residents of Region VI once ongoing investments in the region have been fully materialized.

He cited as an example the new facility of San Miguel Brewery Inc. (SMB), the country’s leading beer producer, in Iloilo.

“Once completed, it will bring more jobs to all provinces in Western Visayas,” he said.