A sufficient and efficient power supply is essential to the progress of Iloilo City, said Senate Minority Leader Franklin Drilon on Tuesday. 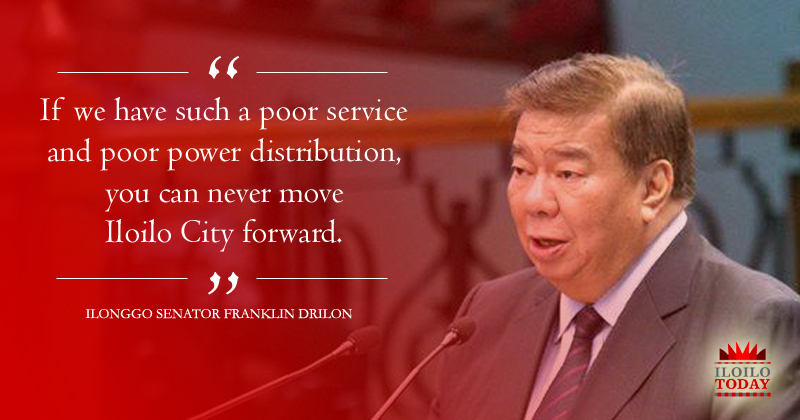 Drilon, who was here for a series of engagements, shared how the power interruption has affected the inauguration of the first Museum of Philippine Economic History in Iloilo City on Monday.

“Here, we demonstrate how difficult it is for us to push what we are actually doing for tourism,” Drilon said.

The portion of J.M. Basa Street and Ortiz Street, where the museum stands, belongs to Feeders 7 and 8 which were affected by the power interruption.

Panay Electric Company (PECO), in a statement, said that the National Grid Corporation of the Philippines (NGCP) shutdown the Sta. Barbara power barge 69,000-volt line and replaced the 69,000 volt pole at Mansaya and Rizal Street in Lapuz district.

The feeders are connected to Line 2, which connects the Global Business Power (GBP) and the NGCP to the PECO feeders, thus there is a need for temporary shutdown while works are ongoing.

With this, Drilon appealed for PECO to already work on a smooth turnover of facilities to incoming power-distribution franchisee, MORE Electric Power Corporation.

PECO’s power franchise expired on January 19, 2019 but its Certificate of Public Convenience and Necessity (CPCN) is still effective until May 25 this year.

Drilon said it is obvious that the power interruption was caused by PECO’s “lack of investment in capital equipment”.

PECO, will not invest on facilities because their franchise had not been renewed, Drilon said.

“We will have this kind of service in so far as the power sector is concerned and if we have such a poor service and poor power distribution, you can never move Iloilo City forward. Everything is affected,” he said.

He appealed to the Cacho family, the family behind PECO’s operations, to negotiate already the amount of assets to MORE power to allow a viable transfer of facilities between the two power companies.

This favors the welfare of the Ilonggos and the progress of Iloilo City, he said. (via PNA)