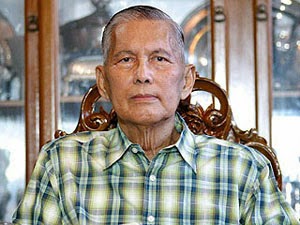 In an interview over radio station RMN Iloilo, former Congressman Raul Gonzalez, Jr. confirmed that his father died at around 10:42PM due to kidney disease. He said that the Gonzalez Sr had been suffering from kidney problems due to his diabetes and underwent successful kidney transplant on September 2007.

He was in and out of hospital ever since, he added.

According to Wikipedia, Gonzalez Sr was born on December 3, 1930. He is the fourth child of Delfin O. Gonzalez, the last mayor of the former town of Jaro in the province of Iloilo; and Estrella Jover Maravilla, a school teacher.

He first ran and won as Iloilo City Representative in 1995 and after serving 3 terms, he was appointed as Secretary of Justice by former president Gloria Macapagal Arroyo.

Gonzalez left behind his wife Dr. Pacita Trinidad-Gonzalez, and five children. The family has decided to laid him to rest in Heritage Memorial Park in Taguig on September 14.

Wake starts September 8  in Heritage Memorial Park, and then his remains will be brought to Iloilo City on September 10 and 11.