She helped her husband picked and sold recyclables from Calajunan disposal facility in Mandurriao district to feed and sustain the needs of their family. And her success from life’s struggles won for her this year’s model mother search. 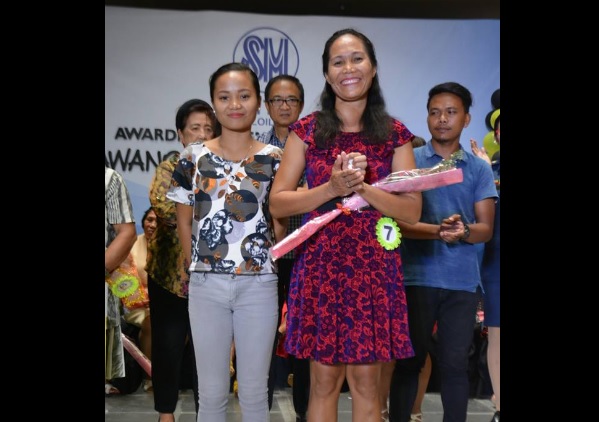 For her feat to raise family in the fight against poverty, Nelina I. Launio, 43 years old of Brgy. Navais, grabbed the Bulawanon nga Nanay 2016 during the awarding ceremony at SM City May 31.

For winning the title of best mother, Launio brought home P17,000 worth of prizes.

Mayor Jed Patrick E. Mabilog commended the winners for their vital contributions to the Ilonggo community.

Launio stressed that education or opportunity to finish studies is the greatest wealth she can give to her children.

Married to a tricycle driver, Launio who now works as daycare worker is a grantee of the national government’s Pantawid Pamilyang Pilipino Program (4Ps) which provides financial assistance to schoolchildren on the condition that they go to school and avail healthcare and nutrition services.

Among her children, the eldest is an elementary education graduate from West Visayas State University while the second child finished Bachelor of Science in Travel Management at Iloilo City Community College (ICCC).

Meanwhile, Jocelyn Y. Fajardo, 58 years old of Zone 5, Calumpang, Molo, received P12,500 prize for placing second. A widow, she stood as both mother and father to her eight children while accepting laundry to feed and send them to school.

Salitre recalled that her agony began when her husband died of gunshot during New Year and since then she didn’t know where to start.

She did laundry, worked in fireworks industry and sewn tarpaulin bags late in the evening while her eldest son drove a trike at night for his next morning’s school fare.

One of her children became a beneficiary of USWAG scholarship program of Cong. Jerry P. Treñas, while another is now a licensed civil engineer, and her only daughter is working in Hong Kong.

She also became a daycare worker, after volunteering for 14 years for supplementary feeding program of City Social Welfare and Development Office (CSWDO).

Salitre’s life story was made into an episode in Maalaala Mo Kaya of ABS-CBN which aired October 9, 2010.

The search for outstanding mother is organized by the Iloilo City Taskforce on Streetchildren headed by Rosalie S. Treñas, CSWDO and City Government with the support of sponsors and partners. [via Iloilo City Gov’t]