ISC Events is pleased to announce the second iteration of CONQuest Esports and Hobby Festival, its flagship event, on July 28 – 29 at the Casa Real de Iloilo. 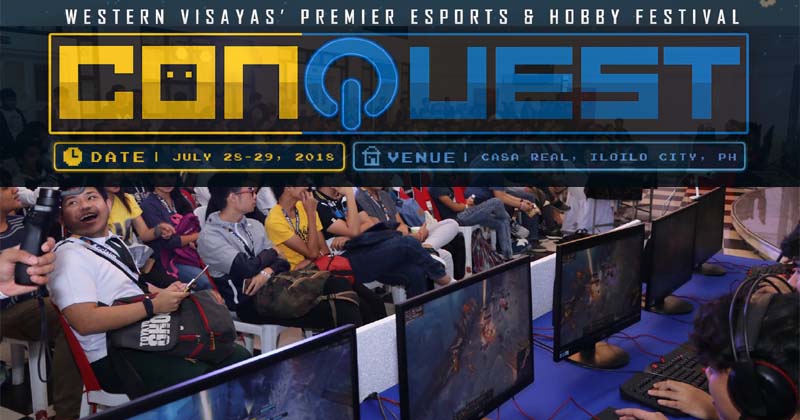 CONQuest was founded to promote collegiate esports in the country, as well as to develop the region’s enthusiast communities. Over 700 attendees flocked to the Casa Real de Iloilo’s Grand Social Hall last December 16 for an unforgettable day of gaming, anime and pop culture fandom.

But now, CONQuest is evolving. With the support of the Iloilo City government and the office of city councilor Candice Tupas, CONQuest 2018 hopes to truly become a national spectacle and city tradition. That is why it will be doubling the days and doubling the space — utilizing the entirety of the Casa Real building, formerly the Iloilo Provincial Capitol building.

Among the activities in store for CONQuest 2018 include the finals of the Garena League of Legends Collegiate League Visayan Conference, the second Western Visayas Cosplay Clash, the ‘Questalks’ series of panel discussions from esteemed industry professionals and an ‘Artisan’s Alley’ featuring 15 of the region’s finest digital artists.

It’s time to give the Ilonggos and the Visayas what they deserve with a world-class event,” said Justin Banusing, ISC Events Director.

“CONQuest was built to grow the collegiate scene as well as local enthusiast communities. That’s why we’re making CONQuest 2018 bigger and better. The scene won’t grow if we are complacent. With the help of the Iloilo City government, we believe we can do great things this year, ” added Krizzian Hernando, ISC Events Assistant Director.