San Lorenzo, GUIMARAS – For declaring a coal-free province and promoting renewable energy, the province of Guimaras and its municipality, San Lorenzo, were given the “Seal of Climate Leadership” award from international organizations Climate Reality Project and Greenpeace. 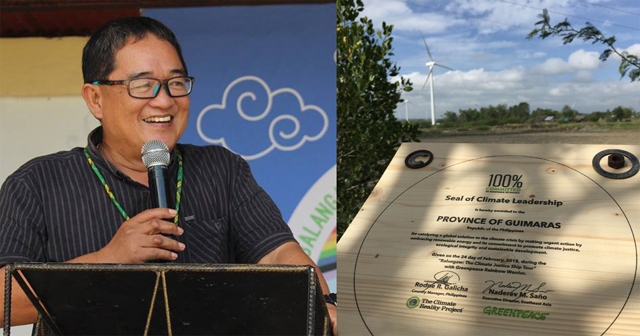 “We want to show the world that we don’t need dirty energy to power development. The people of Guimaras have embraced renewables over dirty, polluting energy. We want to show that a sustainable development path, powered by renewable energy is not only possible, but more viable. And we hope that our humble example will resonate to other provinces and to the world,” said Guimaras Governor Samuel T. Gumarin.

“As Governor of this Province, I am committed to uphold to the development vision of the Province, a place that is safe, healthy and have a better quality of life for every Guimarasnon and for the future generation,’ Gumarin said.

The province is home to the 54-megawatt San Lorenzo wind farm, the first ever in Visayas, that has been operational since 2014. There are plans for expanding this with an additional 40-megawatts in Barangay Sebaste, Sibunag.

“Our people here in San Lorenzo know the benefits of harnessing the blessings of nature to power our development. Here, we have no coal, thus the absence of all the ills and harms dirty energy bring s with it. Today is a victory for our people and our municipality, and I believe, for the whole of Guimaras,” said Ninfa G. Gajo, Mayor of San Lorenzo.

According to Greenpeace, Guimaras has had a long history of resistance against fossil fuels. In 2006, it experienced a devastating oil spill after M/T Solar I, operated by Petron Corporation and Sunshine Maritime Development Corporation, sank off the waters of Panay Gulf. In 2010, Guimaras took a strong position against a coal-fired power plant being proposed at that time in Barangay Ingore, Iloilo City, which would have had very adverse effects on the health and economy of the people in Guimaras, especially their world-famous mango industry. Since then, Guimaras has transformed itself into a community that has embraced wind power as their energy of choice.

The Climate Reality Project is a global movement founded by Nobel laureate and former US Vice President Al Gore which aims to move the conversation forward and turn awareness into action.

“Solutions to the climate crisis are already here, we just need to open our eyes. Our provinces, municipalities, cities and villages are speaking up and sending a strong message that renewable energy is the right way towards genuine development that is sustainable, and that they can be 100% committed to do so. This is adherence to sustainable development goals (SDGs), the Paris Agreement, and beyond, for a safe future and healthy planet,” said Galicha.

“We need to stand up for Mother Nature because we need to be able to hand down a healthy and sustainable planet for our future generations. Local governments are standinhg up to break free from fossil fuels” said Naderev Saño, Executive Director of Greenpeace Southeast Asia.

“Our vision is the same as the vision of the Province of Guimaras. Renewable energy is powering this part of the world and Guimaras is leading the way. It makes us proud being Filipinos and this is kind of leadership the world needs right now,” he said.

Greenpeace said that the declaration of a coal-free Guimaras was made during the visit of Rainbow Warrior, as part of its Climate Justice Ship Tour in the Philippines, which is highlighting the power of people to rise up against the devastating impacts of climate change. The stop in Guimaras gives focus to the initiatives of communities in their resistance against coal and rising up to the renewable energy challenge that should encourage other communities and local government units to do the same. (Photo credits: Rexor Amancio / The Climate Reality Project Philippines)