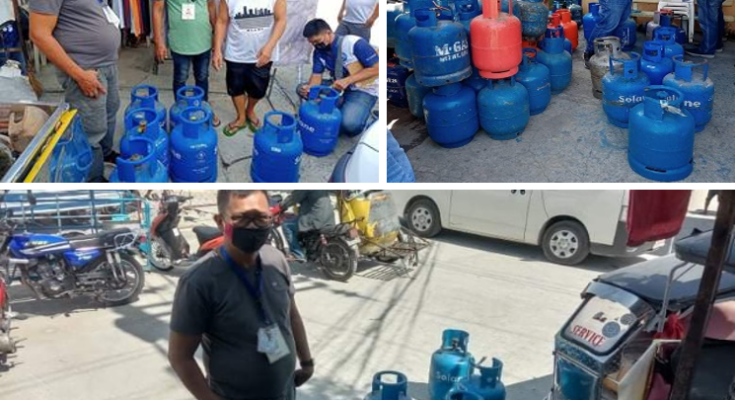 A series of bust operations in Tarlac, Muntinlupa, Bulacan, and Iloilo captured a total of 234 illegally refilled and distributed Solane LPG tanks amounting to a total of PHP 450,950.

In April, seven busts conducted in Tarlac and Muntinlupa confiscated 47 counterfeit LPG tanks. Three raids of which seized 33 tanks from barangays Matatalaib and San Miguel in Tarlac, while four raids seized 14 tanks from barangays Tunasan, Poblacion, Putatan, and Sucat in Muntinlupa. Consolidated police reports of the said raids showed that the cylinders captured were either emptied or refilled, with some bearing counterfeit seals and dilapidated steel tanks.

Following this in May, a sum of 187 illegally refilled tanks were busted in greater Bulacan and Iloilo areas. In Pulilan Bulacan alone, 146 substandard LPGs were seized in barangays Longos and Poblacion. Nine were additionally confiscated from Malolos, and 11 from Calumpit.

Meanwhile, 21 illegally refilled tanks were captured in a series of raids in Pavia and Ciudad de Iloilo City by the end of May.

Along with the counterfeit LPG cylinders, each of the raids in greater Luzon and Visayas also confiscated marked money not lower than PHP 1,000 and delivery receipts from previous transactions.

The country’s most trusted LPG brand Solane continues its efforts to take down malicious sources of substandard LPGs across the country. Since the beginning of the year, the company and several LGUs have been initiating massive operations all across Northern and Southern Luzon, Metro Manila, and Visayas – plucking out hundreds of dangerous counterfeit tanks from the market.

Now, with the recent passage of the LPG Industry Regulation Act (House Bill 9323), Solane is more optimistic to halt the unlawful trade of illegal LPG cylinders.

On its third and final reading, the House of Representatives passed the proposed regulation which aims to establish the regulatory and supervisory framework for the LPG industry. Under this bill, the importation of used and second-hand LPG cylinders or containers will be banned, and strict supervision of LPG standards compliance will be observed.

While the government greases the wheels to a well-regulated LPG market, Solane sustains active reminders for consumers to always verify their LPGs to protect their families and households.

The brand reiterates to choose only LPG products sold by authorized dealers. #VerifiedSolane tanks carry the important markings that certify their registration, the Bureau of Product Standards (BPS) mark that proves the tank passed the standards set by the government, the date of the next requalification, as well as the tare weight of an empty cylinder in kilograms which is around 13 to 15 kilos for AS or de salpak and 11.5 to 14 kilos for POL or de roskas – all made to ensure consumers their kitchen fuel is genuine, safe, and of top quality.