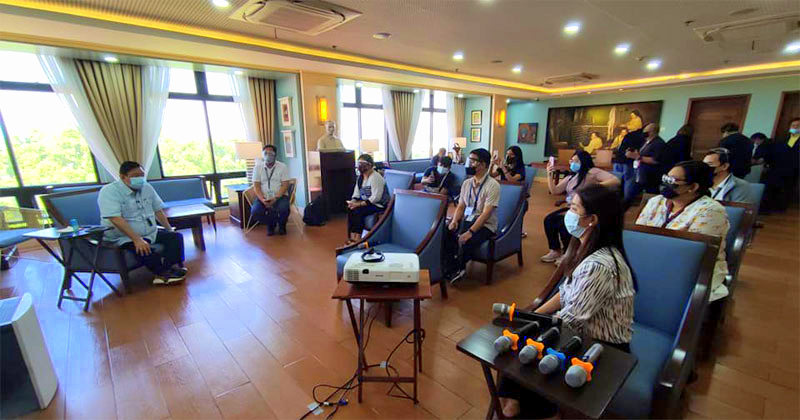 Iloilo City Government has started its multi-sectoral campaign on Coronavirus Disease 2019 (COVID-19) vaccine education and the top bloggers’ group in the metropolis pledged its support for the initiative.

Mayor Jerry Treñas met with Iloilo Bloggers Society (IBS) on Wednesday, February 17 to source out inputs on how to effectively disseminate COVID vaccine information in social media and increase its acceptability.

“We requested to meet you to appeal for your help. Bululigan ta nalang ni kay unless we achieve herd immunity, daw mabudlayan gid kita. We always remembered you because we know that you have followers from different sectors of society,” said Treñas.

World Health Organization explained that ‘herd immunity’ is the indirect protection from an infectious disease that happens when a population is immune either through vaccination or immunity developed through previous infection. To safely achieve herd immunity against COVID-19, a substantial proportion of a population would need to be vaccinated, lowering the overall amount of virus able to spread in the whole population.

Iloilo City Government is targetting to inoculate 70-80% of the population to achieve herd immunity.

Treñas made the appeal for help after receiving reports that the majority of Iloilo City residents do not want to be inoculated with COVID-19 vaccines.

The City has already signed a multilateral agreement for the advanced purchase of AstraZeneca vaccine with the British-Swedish pharmaceutical company. In the agreement, the city government has ordered 600,000 doses of the vaccines amounting to $3 million. The supply is expected to be delivered by July.

Treñas said that he is also in talks with other pharmaceutical firms such Novovax, Janssen, and Moderna. Janssen is currently doing clinical trials in Don Benito Hospital, he added.

To complement the efforts of the City Government, IBS started its own vaccine awareness campaign anchored on the #IloiloPabakunaTa hashtag. Members of the group will produce articles, cards, videos, and other online content urging Ilonggos to get inoculated once the supply of COVID-19 vaccine is ready.

The group will also share accurate and credible vaccine information from the City Government and other reliable sources to thousands of their followers on social media.

Iloilo Bloggers Society was formed in 2019. It is composed of legitimate bloggers and online influencers from diverse backgrounds. Its formation is aimed to become a frontrunner in the online community who plays the role of a catalyst in building a conscientious cybersociety.

Aside from their individual blogs and pages, IBS maintains IBS Digital Network news and media site at www.ibsdigital.net or https://www.facebook.com/IBSDigitalNet.