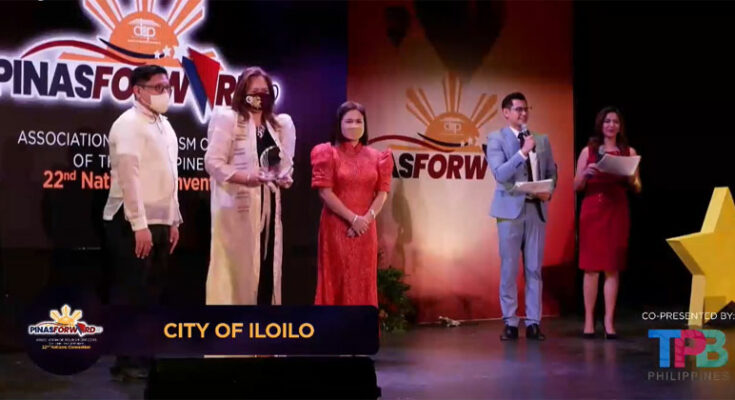 Iloilo City was named as the Grand Winner of the 22nd Association of Tourism Officers of the Philippines (ATOP) Pearl Awards for having the Best Tourism Practice amid the pandemic. Congratulations!

The city was given recognition for its successful conduct of the world-class Dinagyang Festival, which went digital and global dubbed as Dinagyang Digital this 2021. Despite the pandemic, Iloilo City pushed through with the festival and presented it digitally. Netizens were treated to a 360 degrees view of the Dinagyang spectacle with a backdrop of various landmarks all over the metropolis.

City Tourism Officer Ms. Junel Ann Divinagracia received the award for Iloilo City, which bested over 200 other local government units (LGUs) nationwide. The Municipality of Bolinao, Pangasinan was announced as the 2nd placer, while the city of Davao got 3rd.

The prestigious ATOP Pearl Awards program is an annual competition open to all local government units to present their exceptional tourism practices, projects, and innovations. It is part of the 22nd ATOP National Convention entitled “Pinas Forward 2.0” held at the newly renovated Manila Manila Metropolitan Theater and broadcasted virtually at ATOP Facebook page.

Themed as “Search for the Best Tourism Practice During the Pandemic”, the Pear Awards this year showcases the different tourism innovations implemented by the LGU in their destination/area as a response to the challenges faced while the country is battling the COVID-19 pandemic.

In partnership with the Department of Tourism, the Best Tourism Practices Awards was born in 2005 when it was launched during the 6th ATOP National Convention held in Bacolod City, Negros Occidental to institutionalize the annual system of recognition.

With the hope that this award will celebrate the best in the tourism industry that each one of us is collectively doing and contributing to the society at large, ATOP Pearl Awards shall be an award-giving-body which honors the great efforts made by the people in the tourism industry, most especially the Local Government Units.