Government and industry leaders in IT and business process management operations have recently recognized Iloilo City as new Center of Excellence for being a premiere hub for outsourcing and with robust economic growth. 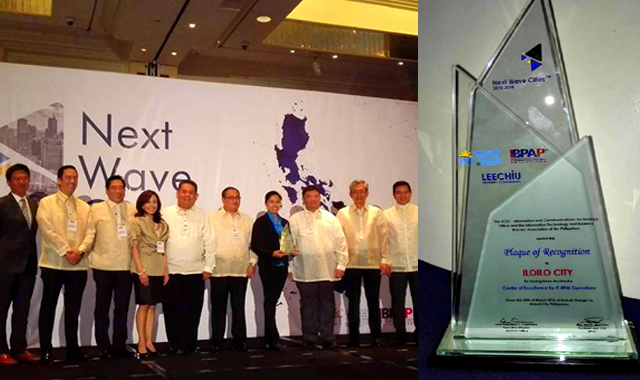 The Department of Science and Technology-Information and Communications Technology Office (DOST-ICTO), the IT and Business Process Association of the Philippines (IBPAP), and Leechiu Property Consultants (LPC) have released their latest Next Wave Cities (NWC) report which identifies cities as top locations for local and international IT-BPM players.

Mayor Jed Patrick Mabilog stressed the citation is a manifestation of the city’s business-friendliness, conducive investment climate, and strong economic promotions in attracting major locators to settle and expand in the city.

Prior to the excellence award, the Next Wave Cities were assessed based on big talent pool, presence of infrastructures, good business environment, and cost competitiveness.

Iloilo City was earlier declared the top location for business environment and risk management (BERM) with a score of 96 percent because of its low vulnerability to natural disturbances and business friendliness.

A perfect score for BERM means that a location has at least four approved sites by the Philippine Economic Zone Authority (PEZA), is not covered by a travel advisory, has an ICT Council, has very low vulnerability to natural disturbances, and a crime rate of less than two percent.

The city government is collaborating and working closely with Iloilo Federation for Information Technology (IFIT) composed of private sector and academe in responding to the needs of BPO industry.

IT-BPAP President Jose Mari Mercado said Iloilo has developed a good ecosystem to attract multinationals and BPOs. He added the next step is to develop the local ICT industry to motivate students to take up IT-related courses and capacity development programs supported by the industry to support the human resource requirements.

Aside from Iloilo, Davao was also elevated to Center of Excellence status. Both cities joined the ranks of Metro Manila, Metro Cebu, Metro Clark, and Bacolod City as prime IT-BPM hosts and high-density locations.

Special awards were also given to four cities that stood out in respective categories. Dasmarinas City was named as the city with Best in Talent Availability; Laoag City is Best in Infrastructure; Dumaguete City is Best in Business Environment; and Legazpi City is awarded with Most Active ICT Council and LGU.

Jose Mari Mercado, president and chief executive officer of IBPAP, said that “these emerging cities have the the potential and foundation to attract BPO firms and become the future Next Wave Cities.” [Photo via JR Delfin]