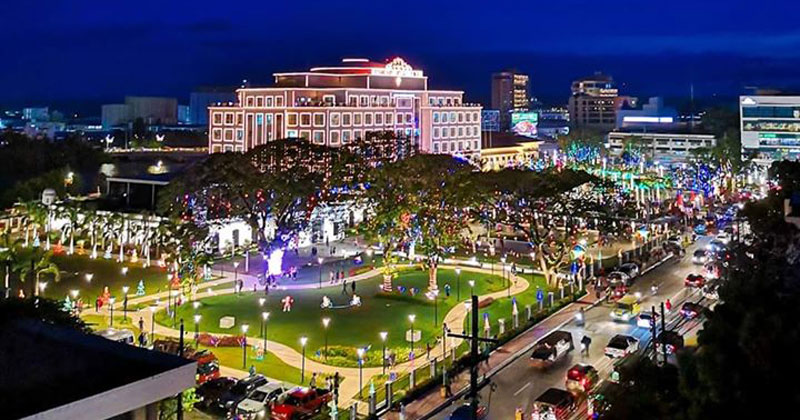 The Iloilo provincial capitol illuminated this city on Monday night as the redeveloped capitol complex was opened and Christmas ornaments and installations were switched on.

The PHP400-million capitol redevelopment project is composed of four phases including the multilevel parking; landscaping of the front of Capitol building up to the Casa Real or the Old Provincial Capitol; improvement of the grounds adjacent to the Western Visayas Regional Museum and the improvement of the power station.

The centerpiece of the redevelopment project is the mural titled “Panaysayun sang Paranublion”. The two-meter by 15-meter mural, which depicts the rich culture and heritage of the province, was designed by Architects Victor Jacinto, Ryan Angelo Braga, Kenneth Torre, and Jorge Cadiao Jr.

It was sculpted by architects Margarette and Albert Pampliega.

The governor also noted the redeveloped capitol complex will be one of the attractions in this city, also in line with the present beautification project of the Iloilo city government led by Mayor Jerry Treñas.

“The move for development of this city and the province is one,” he said, noting the improved capitol complex can contribute to the Department of Tourism (DOT) and this city’s government thrust to make Iloilo City a MICE (meetings, incentives, conferences/conventions, exhibitions/events) destination.

Meanwhile, former governor Defensor Sr., who served as Iloilo governor for 18 years, said the redevelopment of the capitol complex is his “last most treasured project for the province and the people of Iloilo.”

The last tangible legacy he left Iloilo is one of his dreams and aspirations when he was a public servant, he said in his speech.

“I have done a lot for you and the province and the last project that I dreamed of is the redevelopment (of the capitol complex),” he said.

The redeveloped Capitol ground was complemented with the PHP1.7-million Christmas decorations and installations that wowed Ilonggos on Monday evening.

“For the last two or three years, Ilonggos expect a beautiful Iloilo capitol Christmas lighting. We notice the flock of people and ambulant vendors in the nights when we light the Christmas decorations,” he said.

Raymundo advised Ilonggos who enjoy their time with family and friends to take care of the Christmas ornaments and the landscaping at the capitol complex. (By Gail Momblan, PNA | Photo by Nel Angelo Base Magpantay.)