Another Ilonggo soldier was included in this year’s Search for Most Outstanding Filipinos by the Metrobank Foundation. 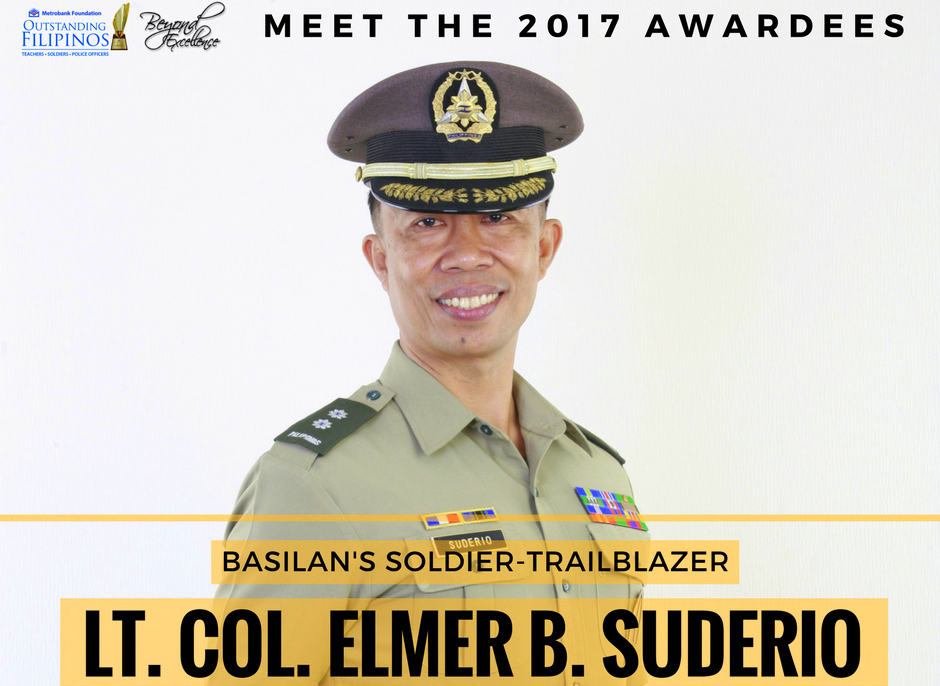 Lt. Col. Elmer B. Suderio, dubbed as Basilan’s Soldier-Trailblazer, is one of the 10 exemplary individuals who will receive the award this coming September 7, 2017 at the Metrobank Plaza, Makati City.

Each awardee – four teachers, three soldiers, and three police officers – will receive a cash incentive of one million pesos, a trophy and a gold medallion.

Suderio is a native of Santa Barbara, Iloilo. He finished his elementary education at Tigtig Elementary School in Santa Barbara in 1983 after which they relocated to her mother’s place in Dumaguete City where he graduated high school.

He then entered the Philippine Military Academy (PMA) and graduated in 1993.

Suderio contributed greatly to the improvement of peace and order in Basilan. As commander of the 3rd Scout Ranger Battalion he led a series of armed operations against the Abu Sayyaf Group (ASG) terrorists from 2015 to 2017 which resulted to the group’s neutralization.

He was also instrumental in transforming the 12th Scout Ranger Company (SRC) into a disciplined and cohesive unit during his stint as company commander in 1998. From being a problematic unit, he turned the 12th SRC as the best company of the First Scout Ranger Regiment that same year.

Suderio also led the conceptualization of a three-unit subject for the PMA curriculum titled MA 341 or “Unit Administration” in 2006. The subject intends to prepare cadets to tackle administrative functions in a military unit. Initially designed for cadets going to the Army, the course is now also a major subject for members of the Navy and Air Force, benefitting about 300 graduates per year.

He also worked to provide alternative livelihood opportunities for Moro National Liberation Front (MNLF) returnees after the organization signed a peace treaty with the government in 1998. Suderio used his strong working relationships with local chief executives and community stakeholders to implement activities such as medical missions and community support programs.

In his 28-year career in military service, Suderio received many awards, including the Gold Cross Medal for leading the 12th SRC against the ASG and a Gawad sa Kaunlaran medal for his civic action programs.

Presently, he is the Assistant Chief of Staff for Operations, G3 and Operations Officer of the Joint Task Force Marawi.[via Capitol News]