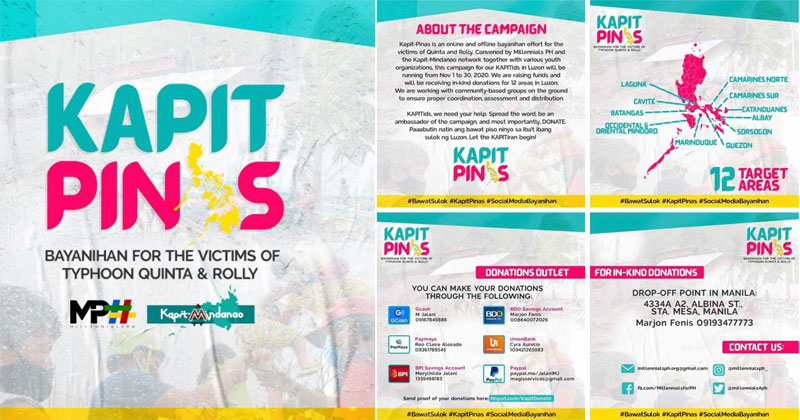 In just three weeks, the Philippines has been devastated by two strong typhoons, Quinta and Rolly, which affected hundreds of thousands of our kababayans most especially in Luzon. This prompted over 100 youth organizations from the Kapit-Mindanao network to join forces once again and organize an online and offline bayanihan effort called Kapit-Pinas, which aims to raise funds and in-kind donations for the typhoon victims.

Convened by advocacy-based group Millennials PH and the Kapit-Mindanao network, the campaign will be running from November 1 to 30, 2020. People can course their cash donations online or drop off in-kind goods at designated points. The campaign will benefit 12 target areas that were badly affected by the onslaught of these typhoons, namely, Camarines Norte, Camarines Sur, Albay, Sorsogon, Masbate, Catanduanes, Marinduque, Quezon, Oriental and Occidental Mindoro, Batangas, Cavite, and Laguna.

“Imagine the struggle of facing two super typhoons during a time when our country has yet to beat the COVID-19 pandemic. This was a call for me and the team to work on another #SocialMediaBayanihan campaign because we need each other now more than ever and youth-led organizations must continuously collaborate to help those who are affected by these disasters,” said Meryl Hilda Jalani, national president of Millennials PH and Kapit-Mindanao co-founder and national convenor.

The campaign was already able to raise PHP 735,000 which is a combination of cash and in-kind donations from its partners, Tanging Yaman Foundation and Premium Megastructures, Inc., three days after the launch last November 2, 2020.

The fund and relief packs obtained through Kapit-Pinas will be distributed through community-based groups located in the above-mentioned areas that have their own disaster response initiatives in line with the requirements of their communities. Some of the needs include food items like canned goods, instant noodles, water; hygiene and dignity kits; and shelter materials. The first wave of relief distribution will begin on November 7, 2020, in Albay.

Banking on the original battle cry of the Kapit-Mindanao campaign, “Aabutin natin ang bawat sulok ng Mindanao,” the network has now expanded from reaching the unreached in Mindanao to helping disaster-stricken brothers and sisters in Luzon. With this, “Aabutin natin ang iba’t ibang sulok ng Pilipinas” is now its goal.

Kapit-Pinas calls on everyone to donate through this link: tinyurl.com/KapitDonate and also join the call to reach more people through the hashtags #KapitPinas and #SocialMediaBayanihan. Local personalities like mental health advocate Dr. Gia Sison and actor Christian Bables also expressed their support for the initiative.