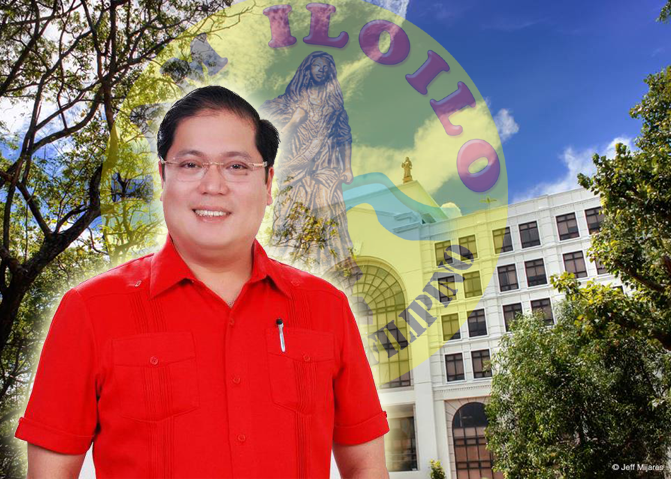 Mabilog is the only local chief executive from the Philippines to make it to the shortlist of 26 finalists from a total of 121 nominations around the world.

In his profile on WorldMayor.com, the City Mayors Foundation commented on Mabilog:
“As mayor, he has prioritised efforts to drive economic development by attracting international investment and to make the city cleaner and more connected. Crucial to his efforts, has been the development of transparent procurement systems within the city council including more e-procurement. The mayor has also led a multi-faceted anti-smoking initiative, which includes education and stricter enforcement of anti-smoking rules.”

The city’s top executive was elated with the honor, as he thanked the people of Iloilo City for support.

“To be named among the World’s Top 5 is a huge honor for me, for my family, for my country, the PHILIPPINES and my city, THE NOBLE CITY OF ILOILO. Thank you dear people of Iloilo City for your trust and overwhelming support. Thank you dear President Benigno Simeon Aquino III and Senate President Franklin M. Drilon for the generous support and trust in my 4 years of leadership as Mayor. Thank you Fr. Boy Celis and all the religous for including me in your prayers. Please continue to pray for me, our nation’s leaders, Iloilo City and our Country. To God be the greatest glory!!! I am Iloilo, PROUD TO BE FILIPINO.” said Mabilog as posted on Facebook.

The City Mayors Foundation has been honoring outstanding mayors around the world every two years since 2004 through the World Mayor Project. The project aims to raise the profile of mayors worldwide by honouring those who have served their communities well, governed openly and honestly as well as made significant contributions to cities nationally and internationally.

Mayor Naheed Nenshi of Calgary, Canada, has been awarded the 2014 World Mayor Prize, while Mayor Daniël Termont of Ghent, Belgium and Mayor Tri Rismaharini of Surabaya, Indonesia were 1st and 2nd runners up, respectively. 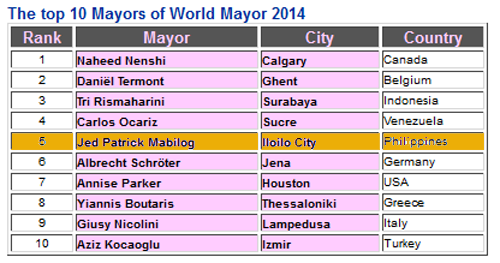 Winners of the World Mayor Prize were determined by the members of jury based on the testimonials submitted online. The panel was primarily influenced not by size of support but by the arguments and persuasiveness of testimonials bestowed on mayors.