Mayor Jed Patrick E. Mabilog presented a Mayor’s Citation to the University of San Agustin (USA) Troubadours for winning three golds in the recently concluded 7th Orientale Concentus International Choral Festival held at the School of the Arts and the Star Theatre in Singapore. 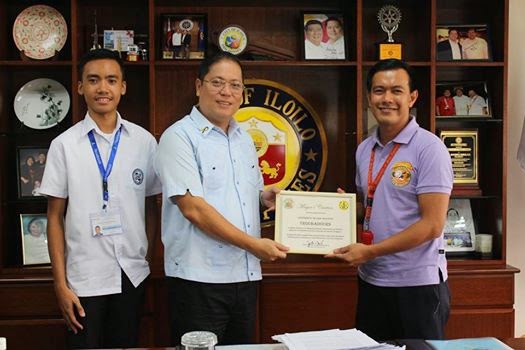 The festival covered 10 categories, with three to eight competing choirs participating in each category.
The USA Troubadours is under the baton of Prof. Arne Sunico Lubasan artistic director.

“This is an overwhelming experience for us – to be performing in an international competition and eventually garnering gold awards in all the categories we participated in,” Lubasan said.

“We share these awards with Augustinian Community, as well as with all our benefactors, sponsors, donors, and supporters. We are also thankful to the support of the University administration headed by president Fr. Frederick C. Comendador, O.S.A,” he added.

“It was not only a chance for USA Troubadours to be exposed to and to learn from the performances of other youth choirs; it was likewise an opportunity for the group to share the talents of the Augustinians, the Ilonggos, and the Filipinos to the world,” says Fr. Williener Jack E. Luna, O.S.A., director for external and alumni relations.

Orientale Concentus is conceptualized in 2008, with the purpose of promoting international arts and cultural exchange as well as youth choral music development in Asia.

The festival in Singapore served as another venue for the youth of Asia to experience this very rich cultural exchange one more time.

The festival in Singapore on July 9-13 was participated by 28 choirs from China, Hong Kong, Indonesia, Malaysia, Philippines and Singapore. [via Source]