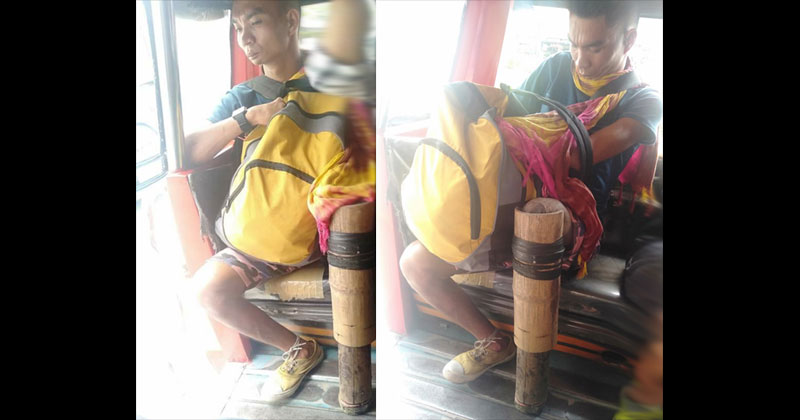 A person with disability in Iloilo who uses bamboo tube as improvised prosthetic leg goes viral online after a netizen captured his ‘heartbreaking’ situation and posted it on social media.

Netizen Sheena Ituriaga Gallego said that she was riding a Jaro CPU Ungka public utility jeepney when she noticed that a fellow passenger has an improvised bamboo leg.

She could not hold her tears looking at the man’s situation. “I’m so sorry if I took your picture without permission…it’s really heartbreaking to see you, Kuya,” Gallego said in her Facebook post.

The PWD was later identified as Darius Senillo, 24 years old of Lambunao, Iloilo. His disability is inborn, and he has been using the improvised bamboo leg as prosthetic for 3 years now.

According to Senillo’s brother, he is 7th out of 8 siblings. Before using bamboo leg, he used to look tree branches as makeshift crutches.

Gallego’s photos of Senillo draw so much attention online as netizens were moved with pity for the latter. As of this writing, Gallego’s Facebook post garnered over 22,000 reactions, 10,000 comments, and 23,000 shares.

For those who want to reach out and provide assistance to Darius Senillo, you may contact him at 09505532131. (With reports from Aksyon Radyo Iloilo | Photos by Sheena Ituriaga Gallego)