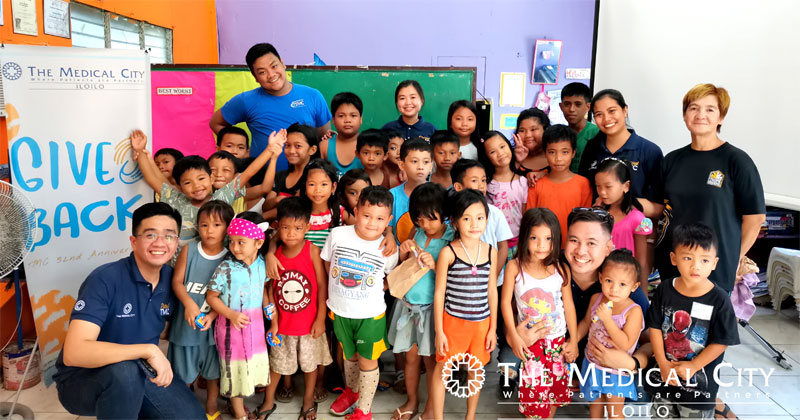 The Medical City (TMC) network launched the “Give Back” Campaign this October in line with the celebration of the network’s 52nd anniversary.

Carried out by the different network hospitals of TMC, the campaign served as TMC’s way of thanking the community for the always choosing TMC their partner in health.

In Iloilo, the celebration was highlighted with series of “Give Back” activities which benefited the patient partners of TMC Iloilo in different communities.

TMC Iloilo’s “Give Back” campaign kicked off with “Talk with Doc” at one of its partner district hospitals, Rep. Pedro Trono Memorial District Hospital in Guimbal, Iloilo on October 23.

“This is the first of the series of the talk that we will be conducting in different district hospitals in Iloilo to give them new learning that they can apply to their operations. But aside from that, this is also TMC Iloilo’s way of building partnerships with the district hospitals to bring forth healthcare to every segment of the society,” Dr. Uy said.

Meanwhile, Josenia Custom, Rep. Pedro Trono Memorial District Hospital Head Nurse is thankful to TMC Iloilo for choosing their hospital to be the first venue of the talk. She highlighted that the new knowledge shared by Dr. Uy is very helpful to them in managing patients who have critical cases.

The second wave of TMC Iloilo’s “Give Back” campaign was held in South San Jose, Molo, Iloilo City, one of the closest barangays to The Medical City Iloilo on October 26.

Around 300 residents of North and South San Jose, Molo, Iloilo City benefited from the said activity.

The “Give Back Box” was also turned over to the barangay officials. The said box contains clothes and toys donated by TMC Iloilo employees.

“The Give Back Campaign is our simple way of showing our gratitude to our patient partners who have become part of our journey as a network of hospital. As we celebrate our anniversary, it is just right that we give back the support and trust that the people has given to TMC when it comes to healthcare,” noted TMC Iloilo Chief Executive Officer Dr. Felix Ray Villa.

ABOUT THE MEDICAL CITY ILOILO

TMC Iloilo is one of the five local hospitals of The Medical City brand. Its other hospitals are located in Ortigas, Clark, South Luzon and Pangasinan.

Entered Iloilo in 2009, it is the first hospital in Iloilo City to introduce “Patient Partnership” service philosophy, a value of care that focuses on making every patient a partner in their journey towards wellness.

The Medical City is the largest healthcare network which owns and operates Guam Regional Medical City, the first Filipino-owned hospital in the United States and an ambulatory Clinic in Dubai.