The National Council For Children’s Television (NNCT), an attached agency of the Department of Education, launched the DokyuBata Festival 2017 Documentary Video Competition. 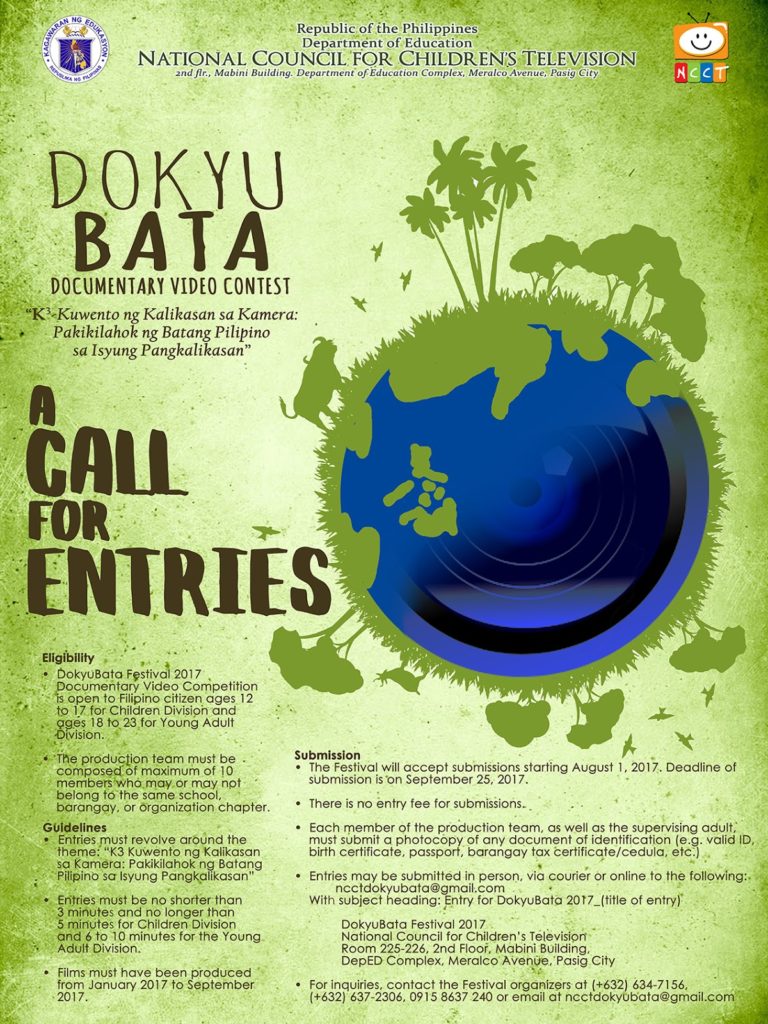 Entries must revolve around the theme: “K3 Kuwento ng Kalikasan sa Kamera: Pakikilahok ng Batang Pilipino sa Isyung Pangkalikasan” — and seeks videos from young filmmakers, of all abilities capturing through their own lenses the realities, challenges, and interesting stories about the environment.

The contest, open to ages 12 to 17 for Children Division and ages 18 to 23 for Young Adult Division, will accept submissions from August 1, 2017 to September 25, 2017. Entries must be no shorter than 3 minutes and no longer than 5 minutes for Children Division and 6 to 10 minutes for the Young Adult Division, including Opening billboard and Closing credits.

Videos must feature live action, and may or may not have dialogues or host. Dialogues in the videos may be in any local dialect; English subtitles, however, must be provided when the spoken language in the video is neither English nor Filipino. The film must be originally shot using any kind of camera.

It is noted that the incorporation of positive Filipino values or local culture in the videos is highly encouraged.

A board of judges that would include but not be limited to professional media practitioners, child rights, and environmental advocates shall determine the best video and recipients of special awards from among the finalists. Their decision is final and irrevocable.

Finalists will be notified via telephone or mobile and electronic mail. An official announcement will also be made on the official Facebook page of the National Council for Children’s Television (fb.com/NCCT.DepEd)