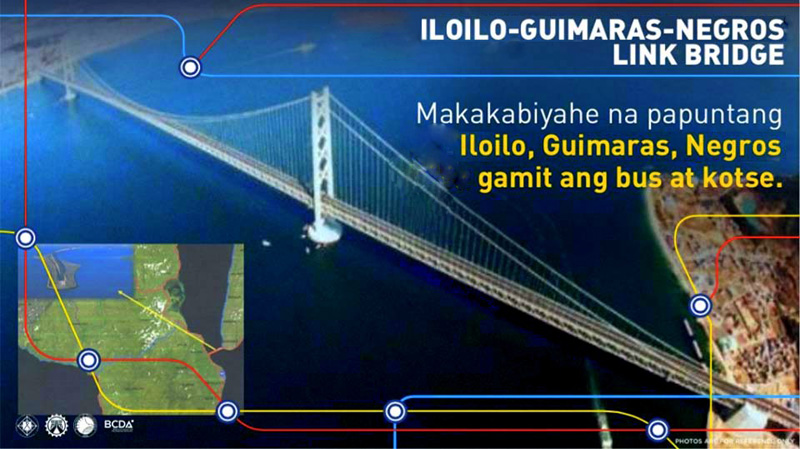 Panay-Guimaras-Negros Island Bridges Project involves the construction of a 32.47-km, four-lane, two sea-crossing bridges, including connecting roads and interchanges that will connect the islands of Panay, Guimaras, and Negros.

DPWH Region 6 said that the Panay-Guimaras segment will be composed of a 13.10-kilometer road, including a 4.80-kilometer bridge, that will start from Brgy. Gua-an, Leganes, Iloilo, and end at Brgy. Getulio, Buenavista Guimaras.

The Guimaras-Negros recommended alignment will start from Brgy. M. Chavez, San Lorenzo, Guimaras, and end at Brgy. Canjusa, Pulupandan, Negros Occidental. It will cover 17.40 kilometers, with a 12.50-kilometer bridge.

In a statement, NEDA said that the project intends to provide a safer, faster, and more convenient transportation linkage between Panay, Guimaras and Negros through a connected land passageway. It is seen to improve the highway trunk networks thus allowing the flow of people, goods and services between the three islands.

NEDA added that the project will cost P189.53 billion, to be funded by China through official development assistance (ODA).

The NEDA Board also approved the Change in Scope and Cost of the Davao City Bypass Construction Project; and the Extensions in Loan Validity and Implementation Period and Increase in Cost of the Samar Pacific Coastal Road Project.

“These projects are the building blocks of our people’s dreams and aspirations. As such, we intend to roll out as many as we can to ease congestion and spread growth throughout the country,” Socioeconomic Planning Secretary Ernesto M. Pernia said. (via NEDA)