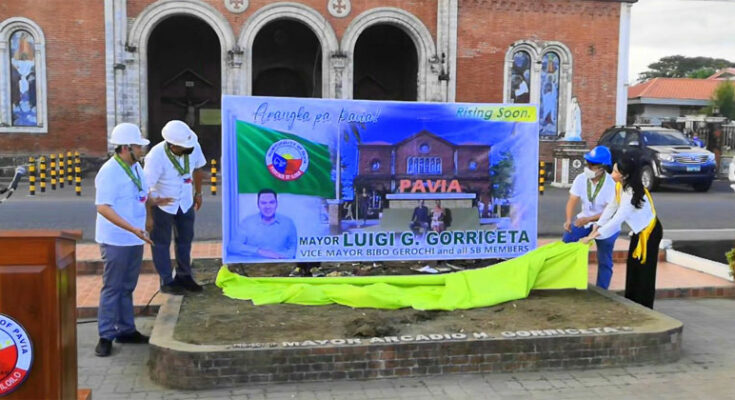 The Municipality of Pavia, Iloilo marked its 101st Foundation Anniversary with the ceremonial groundbreaking of its newest landmark, the PAVIA Sign, and the inauguration of its recently completed Centennial Building at Pavia Public Plaza on Friday, January 14, 2022.

Carabao-Carroza Festival Queen Arielle Justine Panistante and her court were also in attendance, together with municipal employees, barangay officials, and members of the business sector.

The ceremony hosted by Aldene Jose Lapating Duyag were organized and coordinated by the Pavia Tourism Office headed by Dex Dizon.

Located in front of the Santa Monica Parish Church, the construction of the PAVIA sign is expected to be finished this May 2022. The Pavia Centennial Building, meanwhile, was kicked off last year during the centennial celebration and is now ready to be occupied.

“We are very lucky that we are part of this historic event. Our town has become really progressive in just two and a half years despite the pandemic,” said Cong. Gorriceta in his speech.

In his welcome remarks, Mayor Luigi enumerated the awards received by the Pavia local government unit from different government agencies in recent months and thanked the unity and support of his department heads which made the accolades possible.

“All of the successes of our town, whatever we have achieved right now, is also because of our former Mayor and former Congressman ‘Cadio’ Gorriceta,” he said.

The Municipality of Pavia was used to be a part of Santa Barbara town in 1901, and later attached to Iloilo City in 1904.

In 1907, Pavia seceded from Iloilo City together with Leganes and Jaro, making it then an “arabal” of Jaro.

In 1921, then Governor General of the Philippines Francis Burton Harrison issued an executive order separating Pavia from the Municipality of Jaro and making it into an independent municipality.

Delfin Gumban, known as Pavia’s Father of Independence for leading the efforts of obtaining the town’s independence from Jaro, was elected as the first municipal mayor from 1921 to 1924.