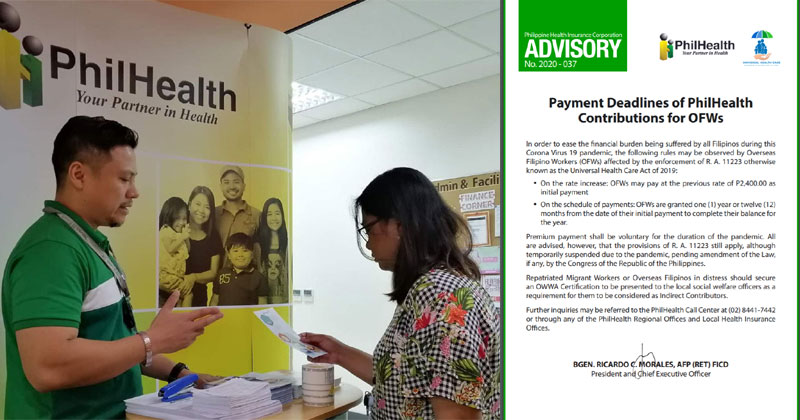 During the hearing of the Joint Congressional Oversight Committee on the Universal Health Care Law, Senator Bong Go, Chairman of Committee on Health and Demography, urged for relief for OFWs who could be overburdened by the increased PhilHealth premium contributions.

Last April, Philhealth reminded OFWs to start paying for higher premium rates, 3% of their basic monthly salary capped at P60,000 this 2020 as mandated by UHC law and its implementing rules and regulations. Most of these migrant workers were shocked to learn of this new policy since previously, they’re only paying a fixed rate of P2,400 annually.

The Senator suggested for PhilHealth to study the provision of leeway to OFWs regarding their contribution increase.

Go then reminded Philhealth of President Rodrigo Duterte’s to make the payment voluntary for OFWs.

PhilHealth President Ricardo Morales said that they have already complied with President’s directive by issuing an advisory.

“We already issued an advisory, Senator. We made the premium contribution voluntary during the pandemic. But to make it permanent, it will require an amendment of the [UHC] law,” said Morales.

Also, Morales said that they are no longer requiring OFWs to pay their premium contributions as a requirement to secure an Overseas Employment Certificate (OEC).

“What we asked the OWWA (Overseas Workers Welfare Administration) to help us with is to register the departing OFWs but not to collect, and not to make the premium collection a requirement for the issuance of the OEC. So it has not been made a requirement for departure,” Morales explained.

When asked by Co-chair Congresswoman Angelina Tan on making OFW payment voluntary, Morales explained that it would be hard to make the payment voluntary as it will violate the ‘foundation of insurance’.

“The foundation of insurance is that somebody must be paying for the benefits. It will compromise the fundamental argument on insurance if the segment of the membership will be made voluntary. Because the other segments might also ask for the same privilege.”