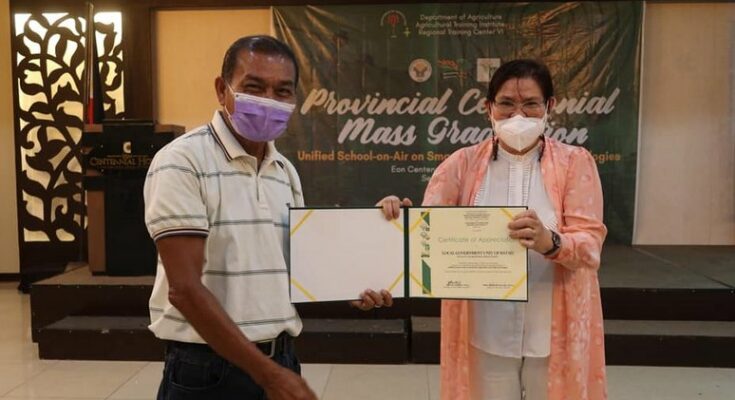 Some 3,969 rice farmers from 37 municipalities in Iloilo and 245 farmers from Guimaras have completed the six-month-long Unified School-On-Air on Smart Rice Agriculture (SOA-SRA) organized by the Department of Agriculture (DA) – Western Visayas and DA – Agricultural Training Institute.

The SOA-SRA in Iloilo which premiered on March 22 was aimed at capacitating the local rice growers amid the emerging sectoral issues and making the rice production industry resilient and competitive.

As a collaborative undertaking of DA, ATI, PhilRice, and the Philippine Center for Postharvest Development and Mechanization (PhilMech), the program was aired in rice-growing provinces with not more than four tons per hectare average yield. In Western Visayas, all six provinces have taken part in the season-long SOA.

Among the participating municipalities in Iloilo, Miagao has the highest number of graduates that reached 500 farmers, followed by Balasan with 208 graduates, Janiuay – 210, Pototan – 182, and Zarraga – 181.

For Warren Carl, a farmer-graduate from Cabatuan, the SOA-SRA lessons had furthered his understanding of how to cope and mitigate the effects of the changing climate patterns to attain improved yield in growing palay.

Magdalena Castro of Dingle, Iloilo was able to determine what are the suitable varieties of rice to be planted in a particular ecosystem and season. The weekly discussions caused her to venture into diversified rice farming where she can generate additional income sources.
“I have also learned that farmers should enroll in the Registry System for Basic Sectors in Agriculture or RSBSA for us to avail ourselves of the different programs, including insurance,” she said.

“We resorted to information technology or digital platforms so we could continue our dissemination of DA programs and projects despite the pandemic. This is one of our tools in sustaining the good palay production performance of Region 6. Four provinces here have more than 100 percent rice sufficiency level,” said Recoter during the virtual mass graduation held on September 28.

Western Visayas achieved the all-time high palay production volume of 2.2 million metric tons in 2020 because of the interventions provided to the farmers through the Rice Competitiveness Enhancement Fund (RCEF) for the certified seeds, machinery, training, and credit support as well as the provision of hybrid seeds and fertilizers under the Bayanihan 1 and 2 funds.

“We had contributed 11 percent to the overall national palay output last year,” she underscored.

However, Director Recoter said that the low farmgate price of palay is still among the primary concerns of farmers in the region. Thus, she encouraged farmers and farmers groups to sell their produce to the National Food Authority to obtain a good price of P19 per kilo for clean and dry palay.

For farmers to access a wide range of interventions from the government especially the machinery and postharvest facilities, she stressed the importance of consolidation and clustering approaches.

“In 2019 to 2020, DA had provided P1.2 billion out of P5 billion RCEF mechanization fund to our region. We urge our farmers to form associations for them to avail themselves of mechanization projects since the interventions are only given to DA-accredited Farmers Cooperatives and Associations (FCAs),” she said.

Similar SOA-SRA modules were also broadcasted weekly in other provinces over DA-funded blocked time radio programs in commercial stations.
Nikki Gallego of the ATI Regional Training Center 6 said that Western Visayas has over 9,000 farmer graduates in the school-on-air that targets to optimize the farm yield and reduce the production expenses of rice farmers. ###(By SMHToreno/DA-RAFIS 6 with Photos & Reports from ATI-RTC VI)