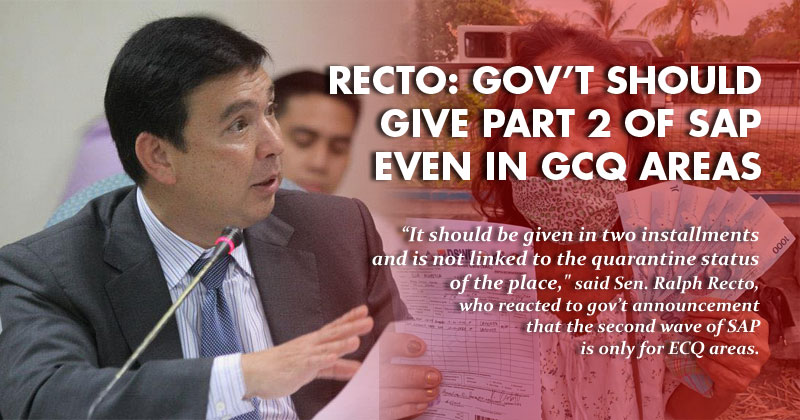 Senators who wrote the provision in the Bayanihan to Heal As One Act granting P200 billion in cash aid to the poor said the second installment should still be given to beneficiaries even if their residence has been downgraded to a general quarantine area.

“Klaro sa records ng debate iyon, that it should be given in two installments and is not linked to the quarantine status of the place,” Senate President Pro Tempore Ralph Recto said.

Per official records, half of the money for the assistance – about P100 billion – is still with the Department of Social Welfare and Development (DSWD), Recto said.

“This should be released pursuant to law. Withholding it is like pulling the financial ventilator of hard up families,” he said.

Recto said “the lifting of the lockdown does not give the government the excuse to end the assistance.”

Section 4(c) of Republic Act No. 11469 provides an emergency subsidy to around 18 million low income households, with an amount ranging from P5,000 to P8,000 a month for two months.

“This is for quarantined families who have lost their incomes. It was never contingent on the status of the lockdown,” Recto added.

The government’s cash aid had an initial target of 17.7 million families. As of mid-May, the DSWD had disbursed a total of P96.15 billion, close to half of the P200 billion it got for the program from the Budget department.

Instead of “shrinking the SAP, the challenge is how to expand it, on how to include the new poor,” Recto said.

“This would be the 10 million Filipinos ‘in the middle of the middle income bracket’ whose maximum subsistence capacity of four to six months is nearing empty,” Recto said.