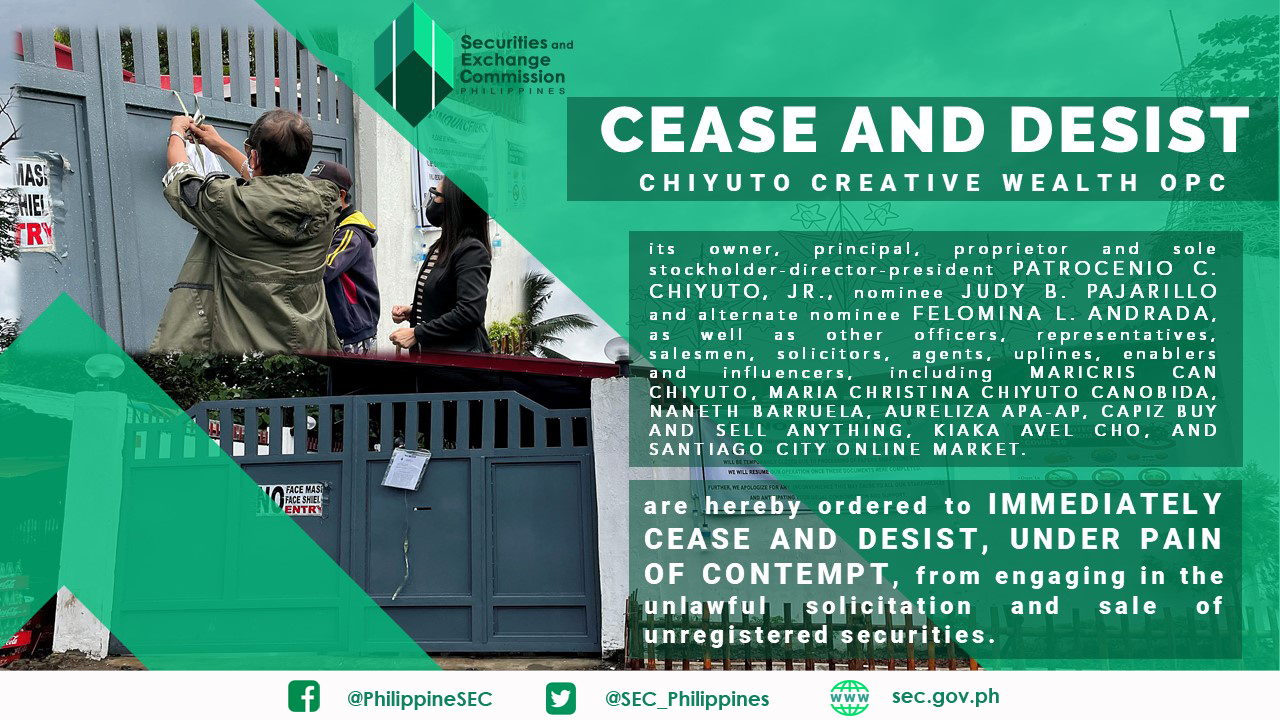 The Securities and Exchange Commission (SEC) has barred Chiyuto Creative Wealth Documentation Facilitation Services from soliciting investments from the public through a double-your-money roulette game.

In an order issued on February 1, the Commission directed Chiyuto, which registered as a sole proprietorship and later on as a one-person corporation (OPC), to cease and desist, under pain of contempt, from selling and/or offering securities in the form of investment contracts until it has filed and secured the necessary license.

The SEC further enjoined Chiyuto and Creative Wealth OPC from transacting business involving funds in its depository banks and from transferring, disposing, or conveying any related assets to ensure the preservation of the assets for the benefit of affected investors.
The order covers Chiyuto’s owner, principal, proprietor and sole stockholder-director president Patrocenio C. Chiyuto, Jr., nominee Judy B. Pajarillo and alternate nominee Felomina L. Andrada.

The SEC Iloilo Extension Office served the cease and desist order last February 3, 2021 to Chiyuto’s residence in Roxas City while another order has been forwarded to his office located in BF Homes, Paranaque last February 2, 2021.

The SEC issued the order after finding that Chiyuto has offered investments to the public with promised returns of 100% in one day, 30 days or 45 days, depending on the outcome of the roulette, without securing a secondary license.

Under the scheme, an investor places as low as P1 to as much as P1 million. Chiyuto will then spin the roulette to select the payout schedule and issue a promissory note to the investor with the corresponding return and day when the guaranteed earnings could be claimed.
In addition, Chiyuto has offered a 5% referral commission and held raffles with brand new cars and motorcycles as prizes to attract more investors.

The scheme involves the sale and offer of securities to the public in the form of investment contracts, whereby a person invests his money in a common enterprise and is led to expect profits primarily from the efforts of others, according to the SEC.

Section 8 of Republic Act No. 8799, or The Securities Regulation Code (SRC), provides that securities shall not be sold or offered for sale or distribution within the Philippines, without a registration statement duly filed with and approved by the SEC.

Chiyuto initially registered as a sole proprietorship with the Department of Trade and Industry and subsequently as an OPC with the SEC. However, it has never secured a secondary license from the Commission as an issuer of securities or broker-dealer nor registered any securities for public offering pursuant to the SRC.

“Clearly, Creative Wealth OPC’s members were lured to invest their money not for an existing legitimate business enterprise but simply because they are guaranteed a 100% return of the same within a definite period,” the order read.

“[T]he act of Creative Wealth OPC and Chiyuto in selling/offering unregistered securities operates as a fraud to the public which, if unrestrained, will likely cause grave or irreparable injury or prejudice to the investing public.”
The SEC emphasized that the certificate of registration granted to Chiyuto explicitly prohibited it from soliciting, accepting, or taking investments or placements from the public, as well as issuing investment contracts, without securing a secondary license.

Accordingly, in a letter dated February 2, the SEC Enforcement and Investor Protection Department subsequently directed Chiyuto to show cause why its certificate of registration should not be revoked and no administrative sanctions should be imposed against it and its directors, officers, and nominees.

The Commission warned the public against investing in Chiyuto and other entities engaged in unauthorized investment-taking activities as early as August 18, 2020, through an advisory, as well as through an investor alert posted on its official Facebook page on October 23, 2020.