Travel and Marketing Experts Corporation (TMX), the only company offering travel and marketing services in Iloilo, is now on its 11th year to manage the Search for Miss Silka pageants in Iloilo.

TMX, which now holds office at Atria Park District, organized the 1st Miss Silka Iloilo way back in 2009, and also Search for Miss Silka Philippines on the same year until 2011. In its 11 years of partnership with Silka, TMX had the opportunity to handle the pageant in Puerto Princesa, Bohol, Dumaguete, Davao, Zamboanga and Ozamis.

The Search for Miss Silka is a regional beauty pageant that is being held in almost 30 cities nationwide. The winner in every city will compete in the Search for Miss Silka Philippines that is held in Manila every November. The winner will automatically be the brand’s ambassadress for the year, joining the celebrated list of Silka product endorsers.

Cosmetique Asia Corporation, the maker of Silka, started the search in 2008 and is now one of the most sought-after beauty pageants in the country. It is the company’s way of celebrating the Filipina beauty while helping the winner in promoting her advocacy. Silka donates cash to the Miss Silka Philippines’ chosen charity.

In Iloilo, the beauty search kicks off with the screening of candidates starting this March, with final screening on April 6 at SM City Iloilo. Official candidates will undergo the talent and swimwear competitions after they are launched and presented to the public during the presentation of candidates. The pageant will culminate with a coronation night which will be held at SM City Iloilo on May 11, 2019.

The pageant is open to all girls aged 16-22 years old, born and raised in her represented area or must submit a poof of present address to meet the minimum one-year residency requirement. She must be at least 5’3” tall, single without child and tattoos. She must have a fair complexion. 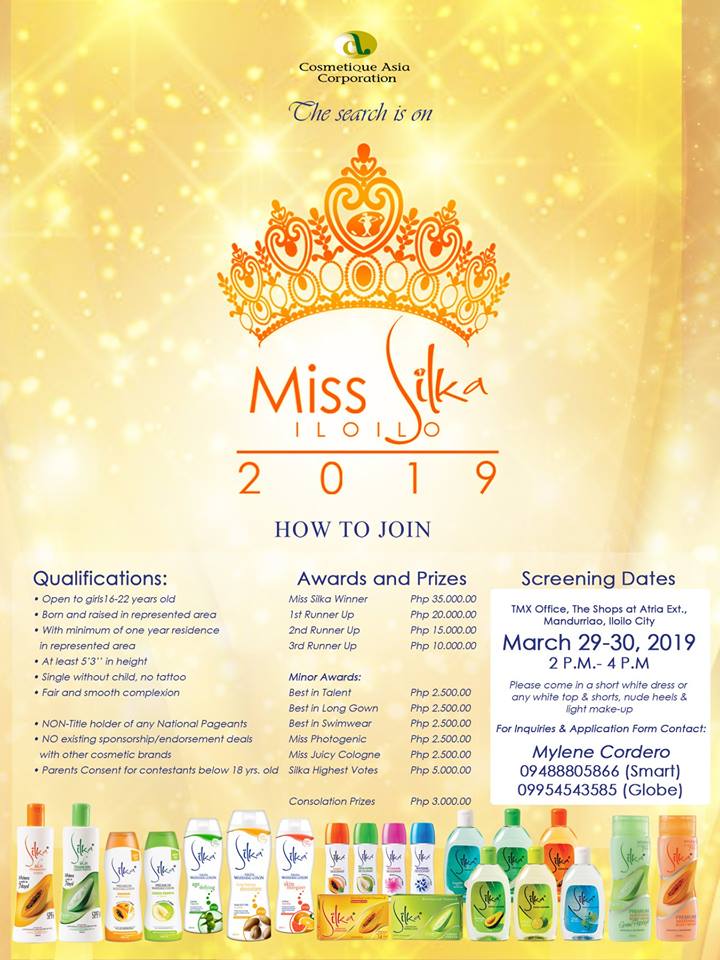 TMX will also manage the Search for Miss Silka in the Visayan cities of Cebu, Bacolod and Tacloban.