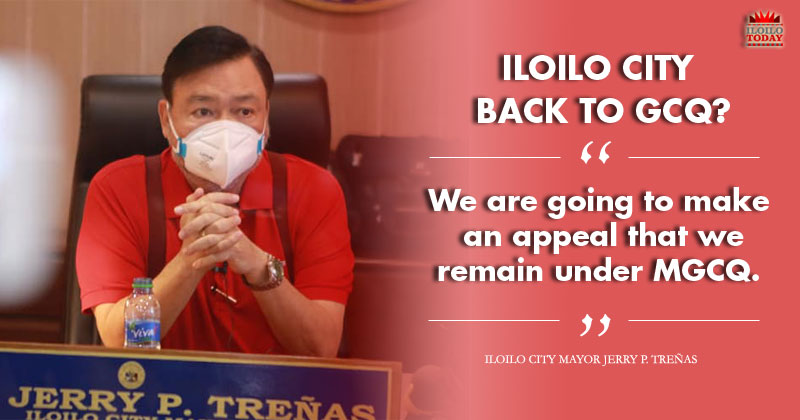 He will appeal the decision, Treñas said in a press conference at City Hall on Monday, July 13.

“We are going to make an appeal that we remain under MGCQ,” Treñas said, adding it is now being finalized by the City Legal Office.

Treñas said the city can “contain everything”, adding it has available facilities for quarantine and can do contact tracing of all confirmed cases when necessary.

The city was placed under GCQ from May 16 where the local government started working on a graduated and phased approach in revitalizing the local economy of the metropolis.

Since it was placed under MGCQ in June, the city government shifted to active campaigning for economic activities by allowing more establishments to operate.

Over the weekend, Treñas was made aware of the plan to revert the city’s status to GCQ.

As of July 11, Iloilo City has recorded 36 local confirmed cases of which 19 have already recovered, based on a report by the city operations center.

It also has recorded 43 repatriates and locally stranded individuals with confirmed coronavirus disease 2019 (Covid-19) cases, 16 of whom have already recovered.

A total of 1,352 persons are being monitored while two are considered as suspect cases.

Treñas also expressed the readiness of the local government to accept locally stranded individuals who will be coming home from Manila.

He said the Presidential Management Staff has informed him that a flight and a sea trip have been prepared to transport the LSIs, who are all city residents.

Once they arrive, they will be quarantined and they have options whether to avail of the swab test made available by a private hospital, or a government sub-national laboratory.

He added the local government will not allow any home quarantine. (via PNA)