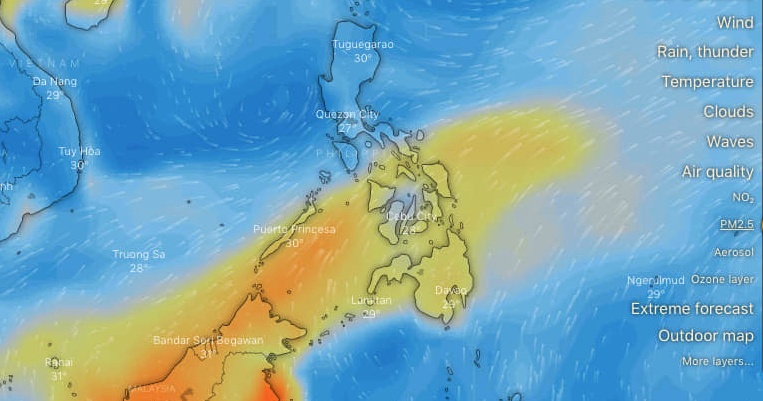 Stay indoors or wear mask! Iloilo, Guimaras, and the rest of Western Visayas were placed under Haze Alert after haze from Indonesia reached the region.

In a bulletin issued Department of Science and Technology (DOST) through Philippine Atmospheric, Geophysical and Astronomical Services Administration (Pagasa), haze coming from the forest fires of Indonesia pushed by Habagat is currently affecting portions of Mimaropa, Bicol Region, Visayas, and Mindanao.

According to news report from ABC, there have been more than 73,000 fire alerts across Indonesia since the beginning of September alone, resulting to toxic smogs that spread to neighboring countries such as the Philippines.

Air quality in Iloilo was measured at PM 2.5 Measure: 51 -56 AQI, which is moderate, unhealthy for sensitive people.

Haze is a sign of air pollution by fine particles (consisting of microscopic solid or liquid droplets) which may pose severe health problems, such as worsening of heart or lung disease, heart attacks, irregular heartbeat, worsening of asthma, and other symptoms, such as throat irritation, coughing or difficulty breathing.

People with heart or lung diseases, children and older adults are more sensitive to the harmful effect of haze. Even healthy individuals may not be spared and will experience temporary symptoms from exposure.

DOST-Pagasa advised the public to stay indoors and keep windows and doors closed. Wearing of mask or eye goggles when going outside is highly recommended. Also, do not jog or run outside as the body ingests more pollutants when active. (Image credits: Windy.com)