Three females were caught on closed-circuit television (CCTV) camera shoplifting at a boutique in Robinson’s Place Iloilo on Thursday, October 13. 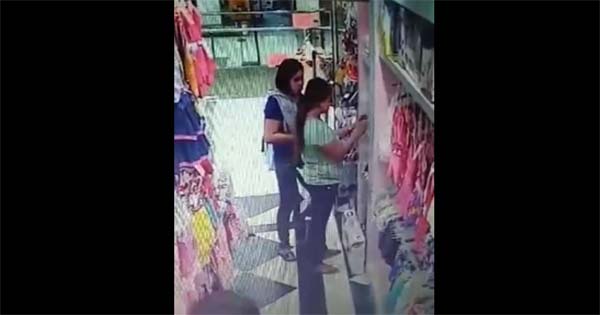 Based on the CCTV footage submitted to the authorities and shared online, the three women shoplifters entered the Babies Corner shop at around 2:54PM.

The one holding two plastic bags went directly near to the lone sales attendant to distract the latter while her cohorts stood near the stall of imported products and started to haul it into their bag.

Footage shows all of them exit the showroom one by one.

According to the owner of the shop, full video footage would show that the woman in green and her companion initially entered the shop to scout for items. When they noticed that there were two sales attendants, they went outside and waited for the right moment to strike.

When one of the attendants went out, the shoplifters entered the shop and did the theft.

The owner recorded the CCTV footage in her cellphone and posted it online. Watch:

According to the owner of the shop, they stole P10,500 worth of Aveeno and Cetaphil products.

She shared the video online to ask netizens to help identify the shoplifters as well as warn other shop owners to beware of them.