A rebel was killed and three soldiers were wounded in separate encounters between troops of the Philippine Army’s 61st Infantry Battalion (61st IB) and members of the New People’s Army (NPA) in Iloilo province on Saturday morning. 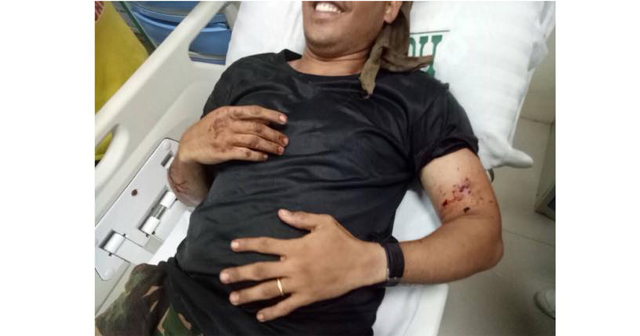 The rebel was killed in the first encounter in Sitio Anoy, Barangay Cabalunan in Miag-ao town at about 5:49 a.m.
Brig. Gen. Pio Diñoso, commanding officer of the 301st Infantry Brigade, said in an interview that the slain rebel has yet to be identified as the Scene of the Crime Operation of the Philippine National Police is still investigating the scene. Soldiers recovered one M653 and AK-47 firearms.

The soldiers were patrolling the village of Cabalunan when they encountered about 15 rebels who were the first to shoot. The firefight lasted 10 minutes, said Diñoso.

“There are locals reporting to us that there are NPAs in the area doing some extortion and recruitment so we conducted a community protection patrol,” he said.

Diñoso said the soldiers were on their way to the village after receiving reports from locals about the presence of the NPA in the area when an explosion occurred and wounded three soldiers.

A 10-minute firefight ensued, he said, adding that his men sustained only minor injuries.

“They even wanted to continue with their operation,” Diñoso added.

The wounded soldiers, however, were pulled out to be given anti-tetanus shots. “Hopefully, after they will be given (anti-tetanus) shots, they will get back to their operation,” he said.

Diñoso said the two encounters are manifestations that the public has already mustered the courage to help government forces by giving them information on the activities and whereabouts of the rebels.

“Maybe, the public is already tired of the extortion and recruitment activities of the NPAs. That is why they are already helping us,” he said.

Hot pursuit operations against the rebels involved in the two encounters are ongoing and additional troops have been deployed to help. (By Cindy Ferrer, PNA | Photo by 61st Infantry Hunter Battalion)