Family and friends of Frances Claire Braga are asking for help to find the 16-year-old student from of Barotac Nuevo, Iloilo, which has been missing since Sunday afternoon, November 8. 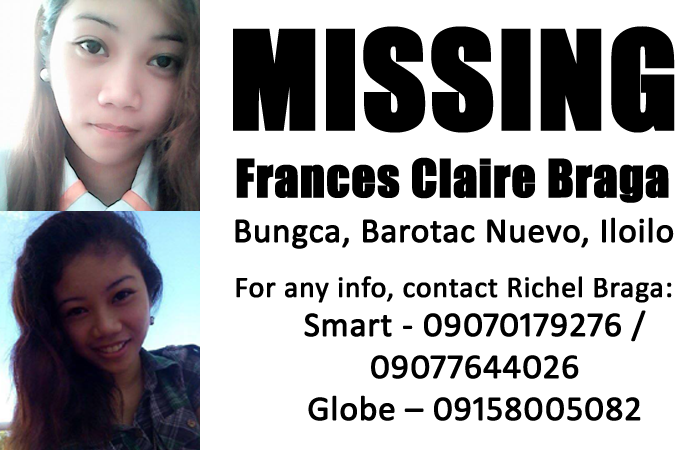 Braga, a first year college taking up BS Information Technology course in West Visayas State University, was on her way to Iloilo City from Brgy. Bungca when she went missing. She was wearing yellow shirt and black leggings, with shoulder bag and a backpack.

Her aunt Rosie Hilay in Arevalo (where she was staying) said that at around 3:00 PM, Claire texted that she was already on the Ceres bus to the city. An hour later, she sent a message to her father that a stalker who had been following her is also on the same bus.

Her father suggested that she take a picture of the stalker, but she wasn’t able to reply and later her number couldn’t be reached anymore.

The bus ‘konduktor’ said that he remembered helping Clare with her bags as she stepped off the bus at Tagbak Terminal. Then an acquaintance Grash Salazar said that she rode the same Jaro Liko jeepney from the terminal to the city, but the former disembarked at Jaro Plaza.