A grade school pupil from Ateneo de Iloilo was selected as one of the six junior ambassadors to represent the country in the 26th Asian Pacific Children’s Convention (APCC) to be held in Fukuoka, Japan on July 10-24, 2014. 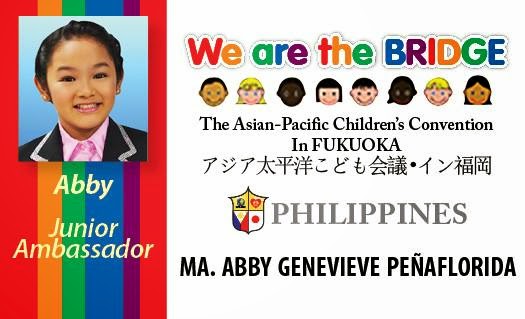 Eleven-year-old Ma. Abby Genevieve Inocencio Penaflorida, daughter of lawyer Joebert Penaflorida and wife Rhea Inocencio, was chosen as a Philippine Junior Ambassador and the first student outside Metro Manila and Luzon to be selected in the last 26 years.

Abby is also the current president of the Junior Student Council of Ateneo de Iloilo.

Abby underwent a rigid screening before qualifying as a Philippine Junior Ambassador for Japan Convention where all expenses for the trip, including airfare, food and accommodation are provided by APCC.

APCC aims to develop children to become global citizens who will shape the world in the 21st century by gathering them together in Fukuoka to gain mutual understanding of different cultures and traditions through home stay and cultural exchange.

A total of 230 children from 58 countries and big cities in the Asia Pacific region and 40 peace youth ambassadors will gather in Fukuoka to participate in the biggest international event for children aged 11 years old.