Mayor Jed Patrick E. Mabilog has announced that there will be no classes in all public elementary and high schools in Iloilo City on Tuesday, July 8, 2014. 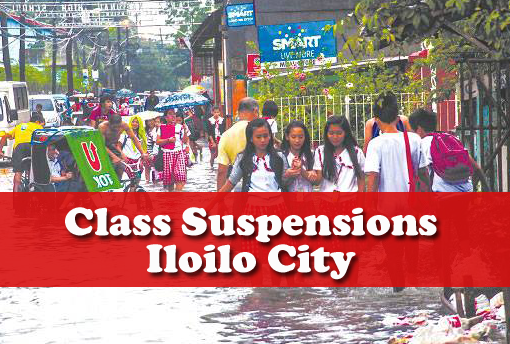 The class suspension was declared due to heavy rain and flooding in most schools in the city. For private schools, it is up to administrators to make a decision on the matter.

CLASSES TODAY are suspended 7/08/14 – just spoke to the Schools Division Superintendent that due to the heavy downpour were some schools are still experiencing some flooding, we are declaring that classes are suspended today in all public elementary and high school under the Division of Iloilo City. For Private schools declaration depend on the announcement of the school heads of their respective schools, so please listen to your reliable favorite am radio statuons like RMN and BOMBO RADYO, SUPER RADYO, etc. for their respective announcements. SO ORDERED. – Dr. Jed Patrick Mabilog, City Mayor and Dr. Nelly Valerio, SDS, Iloilo City

Pursuant to Executive Order No. 66, s. 2012 signed by President Benigno S. Aquino III, “In the absence of typhoon signal warnings, localized cancellation or suspension of classes and work in government offices may be implemented by local chief executives, as chairmen of the Local Disaster Risk Reduction and Management Council (LDRRMC) concerned, in coordination with PAGASA and the NDRRMC, specifically in flood-prone or high risk areas.”

Schools with no classes

Keep it here for updates on announcement of private schools. Please Like Iloilo Today in Facebook for more notifications.