As Iloilo City’s first and largest homegrown BPO marketing company hits its tenth year, Callbox Inc. will celebrate with no less than a rave party on July 4, 2014 with the country’s best DJs making sure it is fun all the way to sunrise.

“Insomnia: Party Till Dawn” will start at 9 p.m. at SM City Iloilo Open Grounds with Urban Music Awards Club DJs of the Year, Ace Ramos and Ron Poe, Hypeman of the Year MC Ron Thug and some of Iloilo’s Top DJs entertaining an estimated crowd of three thousand. 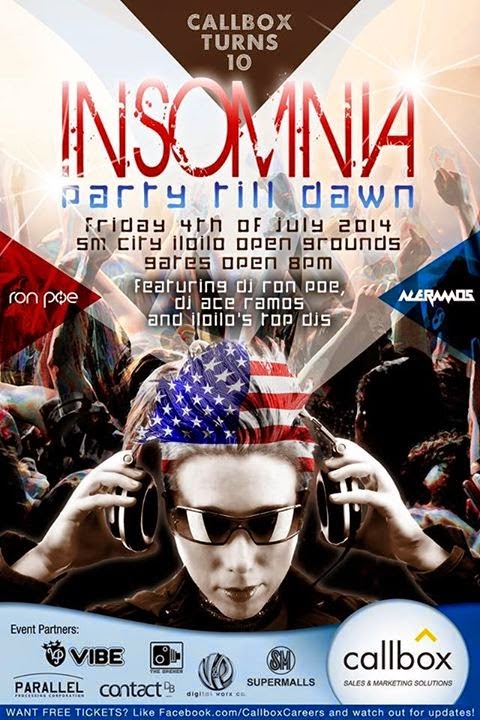 While Callbox is giving away 200 limited free tickets to Insomnia through a promo (via Facebook CallboxCareers – Iloilo), tickets can be bought for P200 each at the CallboxRecruitment Office or contact: 336-2385.

What makes Callbox a truly homegrown company is that from its humble beginnings as anIlonggo start-up and through its rapid growth as a leading name in the global B2B marketing arena, the company’s success has always been the product of the talent, skills and hard work of its more than 800 employees, majority of whom are Ilonggos in its Iloilo and Davao offices.

Callbox is now one of the world’s largest and most recognized companies in the B2B marketing industry, having beenawarded Top Outsourcer of outbound services by Contact Center World and Leading Provider of Outsourced Sales and Marketing Services by Datamonitor. Callboxis currently preparing to take Iloilo’s banner further in the area of technology- driven marketing solutions as it looks forward to celebrating its next 10 years.

Dresscode:
Come As You Are in Red, White or Blue

Win FREE Tickets to the Insomnia party by signing up at Facebook.com/CallboxCareers.