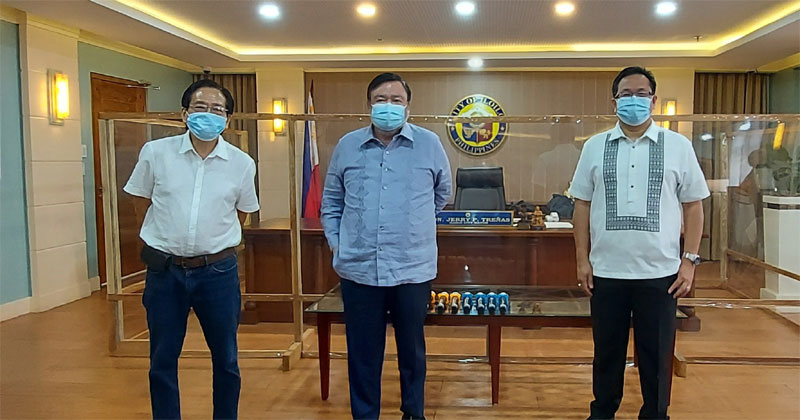 Department of Agriculture Assistant Secretary for the Visayas Hansel O. Didulo and Mayor Jerry Treñas forged a partnership for the common goal of improving the lives of the farmers and fisherfolk in Iloilo City.

Didulo had a coordination meeting with Treñas at the Conference Room of Iloilo City Hall at 2:30 in the afternoon of September 14, 2020. They discussed the status of the agri-fishery sector, the feasible projects that can help mitigate the impact of the pandemic, and other agri-fishery support ready for distribution to the farmers and fisherfolk in the city, in consonance with Sec. William Dar’s Plant, Plant, Plant Program.

During the meeting, Mayor Treñas appreciated the recently conducted Urban Gardening Activity initiated by the OASV implemented to the 7 Districts in Iloilo City. The City Mayor believed that the project is very helpful especially nowadays. He also said that he launched JPT Ediscape (Edible Landscaping) in collaboration with other stakeholders to 12 barangays in the city to promote health and safe food and for socio-economic reasons for the people.

The 1 hour and a half meeting also talked about the fisheries projects such as the milkfish and tilapia fingerling dispersal program of the Bureau of Fisheries and Aquatic Resources (BFAR). The upcoming turn-over of 10 fiberglass boats to the 10 fisherfolk of 5 barangays in the city was also discussed. According to Mayor Treñas, these projects can surely bring joy to the fisherfolk and can somehow ease their worries during these times. The 10 fiberglass boats were made possible through the support of the BFAR VI.

Another agendum was about the trading and marketing support for the farmers. Didulo presented the importance of the KADIWA program of the Department during lockdowns and that it can still be a very effective marketing strategy to support the farmers as well as benefit the consuming public of 20% lower costs of farm produce. As the City Government also has the “USWAG Rolling Store” program, ASec Didulo offered to assist in linking more farmers association to the program through the DA – Agribusiness and Marketing Assistance Division VI (DA-AMAD VI).

Didulo also encouraged Mayor Treñas to buy rice directly from the farmers of which the latter gladly welcomed the idea on condition that the cooperatives should have complete procurement documents and can meet the budget. This other concern will then be discussed with DA-AMAD VI Chief Maria Teresa Solis for possible market-linkage with rice processing centers and cooperatives.

Moreover, ASec Didulo emphasized during the meeting the importance of farmers’ registration to the Registry System for Basic Sector in Agriculture (RSBSA) as one of the most important steps to be able to avail projects and insurances from the Department. Similarly, ASec Didulo encouraged Mr. Hechanova to continuously send letters of intent for their desired agri-fishery projects in the city.

Other topics discussed were the status of oil spill incidents and the development plans for the slaughterhouse.

Before the meeting has ended, Didulo and Treñas agreed to continue work alongside the upliftment of the agri-fishery sector in the city.