A species of baleen whale was found dead off the coast of Brgy. Gabi, an island barangay of Isla de Gigantes of Carles, Iloilo Monday morning, February 4, 2019. 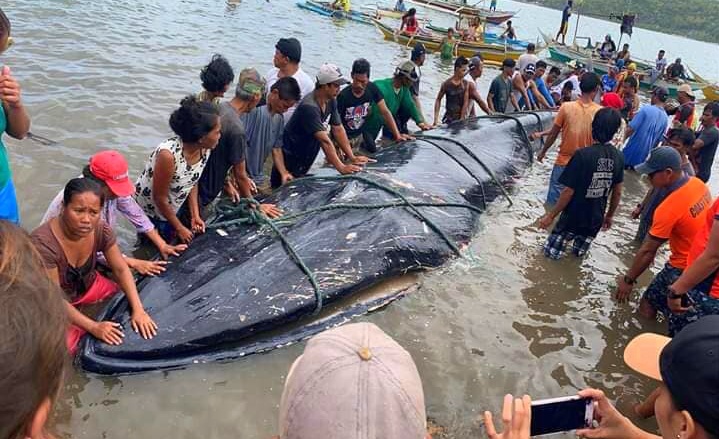 The Bureau of Fisheries and Aquatic Resources (BFAR) has left to the discretion of the local government unit (LGU) of Carles on what to do with the 36-foot baleen whale species washed off the coast of the island.

BFAR 6 (Western Visayas) Regional Director Remia Aparri, in a phone interview, said since the whale is already dead, the LGU might plan to bury it.

However, Aparri said it is up to the LGU if it has the capacity to preserve the dead mammal.

She said the whale probably got stranded while looking for food.

Such species, she said, stay on the deeper portion of the ocean.

“They feed on small fishes, crustaceans, and probably, they got stranded while running after a school of fishes,” she said.

Aparri added the area is productive because of the closed season that was implemented for sardines, herring, and mackerel.

The LGU of Carles has already deployed its marine biologist to Barangay Gabi where the whale was found.

The village is one of the four island barangays of Isla de Gigantes of Carles, can be reached through a pump boat after more than an hour travel.

“BFAR will assist in the identification,” Aparri added.

However, she urged residents to immediately assist similar kinds of sea creature if they are still alive for them to go back to the deeper part of the water, or notify their LGU so they can make the appropriate action. (By Perla Lena, PNA | Photo courtesy of Albin Magnate)