Joining the revolution of the environmental movement that has grown exponentially over the years all over the world, the Department of Environment and Natural Resources (DENR) 6, SM City Iloilo and other community partners and advocates gather together to celebrate Earth Hour 2018 on March 24. 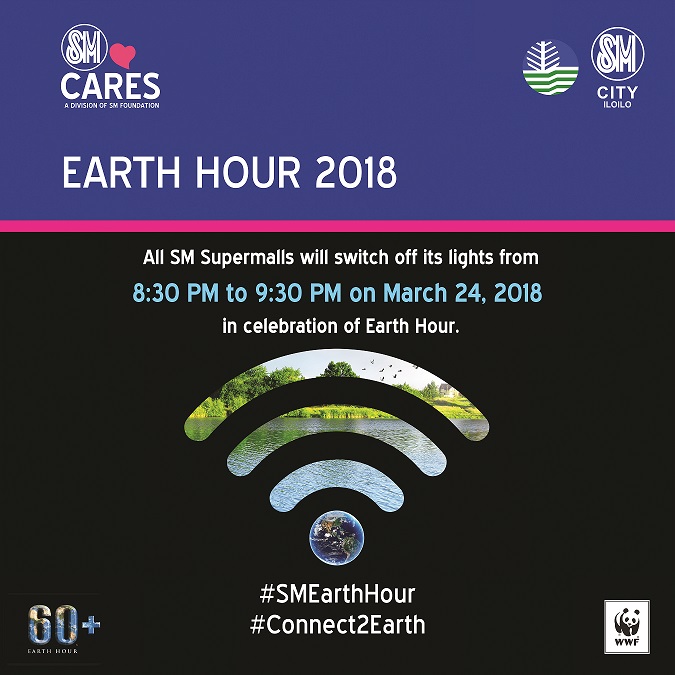 The movement has spawned and encouraged many worthwhile initiatives worldwide such as massive recycling efforts, passing of legislations against air and water pollution, stricter enforcements for marine life protection, among others.

National Government Agencies as well as private organizations converge as this year’s celebration calls the people to “Connect to Earth” and move collectively against climate change and the steep decline of nature, as biodiversity loss threaten our planet. We must understand that the variety of life and their habitats are our best defense against the rapid climate change.

It has been nine years since SM Supermalls participated in the annual Earth Hour. From just several of malls in 2009, the company’s Earth Hour movement have grown to all SM Prime developments, 68 malls nationwide, 7 SM Malls in China, plus its affiliated establishments namely SM Development Corporation (SMDC), taking part in the lights off initiative. In SM City Iloilo, it will be held at the SM Southpoint starting 6pm.

SM place environment and sustainability at the forefront and the centerpiece of their operations, taking greater measures to efficiently manage resources such as energy and water consumptions, as well as waste and water emissions.

Tenants will also be encouraged to turn-off exterior and interior lights while maintaining 50% lighting in the store premises as not to disrupt store operations.

Also joining the celebration is the Talahib Eco-Trekkers Organization Inc. runners. PCD School of Performing Arts will have a special ballet performance. A musical entertainment by the RCP Ritmo Tambores and SM Little Stars 2017 Winner Maxwell Jesse Figueroa as well as a performance from West Crew Dance Group will liven up the gathering as it aims to encourage shoppers and walk-in participation in the said advocacy.